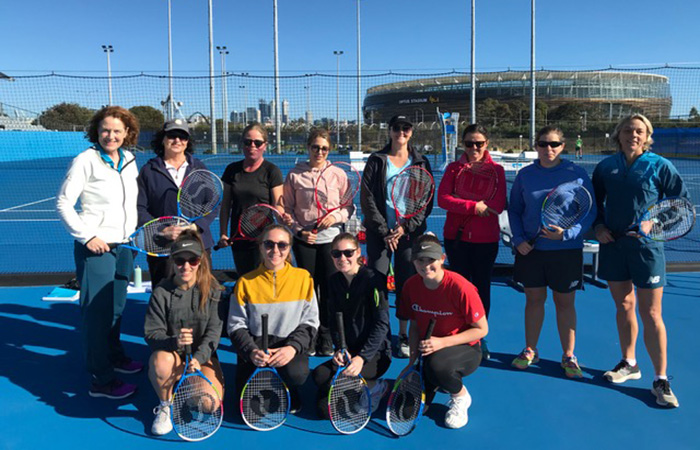 Inspired by her lifelong love of tennis, Derby local Sally Courtney has taken her passion for the sport to the next level, by travelling to Perth to attend the All-Female President’s Community Coaching Course presented by Tennis Australia.

Playing tennis throughout her youth, Courtney says an ingrained love of the sport meant tennis had always been a constant. When that constant was missing in Derby, Courtney set about bringing tennis to the remote North West community.

“I grew up in a small country town of about 6,000 people where tennis was central to the vibrancy of the community,”

“I had so many great opportunities and experiences growing up and they were all because of tennis,”

“I was mad on tennis from a very young age and that passion has always stayed with me,”

“I took it with me to boarding school where I played in school teams and having moved around a bit as an adult, I’ve always made a point of joining local clubs,”

“When we moved to Derby there was no tennis and I felt completely lost. So I set about creating a change for the better,” said Courtney.

Driven by a desire to hit the courts with like-minded adults, and inspired by her own positive grassroots experience, Courtney was determined to engage the Derby community in tennis.

Courtney’s desire to see tennis up and running in the remote North West town of Derby led her to work with the Shire in returning tennis to the town of 3300 locals. With many adults keen to see tennis return to the town’s social calendar, the biggest struggle for Courtney was in finding a coach for the junior players. Eventually taking up the challenge of coaching herself, Courtney was joined by a fellow Derby local and provided invaluable support by the Broome TC.

“Eventually I convinced another Mum to help me and thanks to funding from the Shire, we were up and running in no time and coaching up to 40 kids each term,”

“It was incredibly nerve racking to begin with, we were coaching these kids off our own experience and were very conscious of delivering on our promises,”

“Broome Tennis Club were instrumental in making sure we were on track with our delivery and would travel to Derby to assist with coaching sessions; but that model wasn’t sustainable,” said Courtney.

Realising the important impact tennis was having on the local community, and desperate to help create some of the same great experiences she’d had growing up, Courtney decided it was time to ensure the delivery of quality coaching by participating in the President’s Community Coaching Course.

“I’d seen tennis fill a void for the kids who were looking for something a little different from the more traditional sports offered in Derby,”

“They were picking up racquets at home and hitting in their own time, it had become a big part of the kids week and I didn’t want to let that go”

“I was becoming dissatisfied with my own delivery and was frustrated by not knowing how best to work with the kids at correcting their skills,”

“So I decided that if I was going to continue to offer coaching, then it was time to upskill,”

“And I haven’t looked back,”

“I had the passion and enthusiasm to coach tennis, what I have now is a real confidence in my abilities to deliver quality coaching,”

The course, presented by Coach Resource Manager Christina Ladyman and Manager of Education and Professional Learning Andrea Buckeridge, builds on the foundations of beginning coaches in working to develop the skills of junior tennis players with a focus on the ANZ Tennis Hot Shots program.

The majority of the course is spent on-court with participants actively learning how best to deliver coaching sessions where players serve, rally and score using modified balls, racquets, nets and courts appropriate to the developmental needs of junior players.

Ladyman says the President’s Community Coaching Course plays a pivotal role in the development of aspiring coaches and the rise in female coaches advancing their skills is pleasing to see.

“Our Community Coaching Course helps to build confidence in our developing coaches,”

“That confidence transfers to everyone involved in the experience,”

“Offering subsidised, all female courses, has been instrumental in raising the number of developing female coaches across the country,” said Ladyman.

To find out more head to: https://www.tennis.com.au/coaches/coach-education/community-coaching