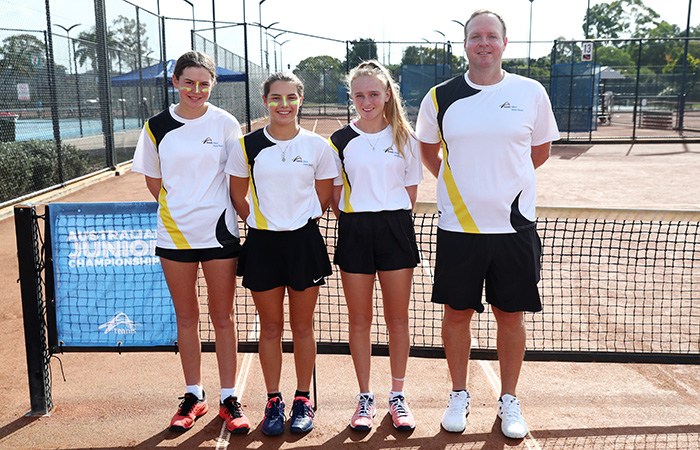 WA’s top junior players have returned home victorious having claimed both the Girls 13/u and Boys 11/u National Championship titles at this week’s Australian Teams Championships held in Carrara, Queensland.

Jessie Culley, Lily Fairclough and Taylah Preston proved dominant on the clay throughout the Girls 13/u Championships pool play, dropping just one set to progress to the Final.

Up against QLD in the decider, the WA trio proved too strong against the home team. Jessie Culley and Taylah Preston paired in the Doubles putting WA on the board early with a convincing 6-3, 6-2 win.

Continuing the teams winning streak and securing the title for WA, Taylah Preston returned to the court for the Singles rubber winning 6-2, 6-3.

The WA 13/u Girls won the Australian Teams Championship title and were awarded the Mary Hawton Trophy for their 2-0 win over QLD.

Tennis West National Academy Manager and coach of the 13/u Girls team, Tom George says the girls were incredibly consistent all week.

“It’s really great to see these girls competing so strongly against the top players from Australia and the Asia Pacific region,”

“Dropping just one set on the way to the Final is really something else and the girls should be incredibly proud of themselves,”

“Their commitment, determination and hard work is evident in their success but also in how they manage themselves both on court and off court,”

“It’s such a privilege to work with these girls, and I’m so thrilled to share in this great win with the team,” George said.

Showcasing equal talent at the Championships were the 11/u Boys Jake Dembo, Liam McDowell and Nemanja Savic who competed well on the hard courts throughout the week in progressing to the Final.

Up against ACT in the Final, Jake Dembo and Nemanja Savic paired well in the Doubles winning 6-2, 6-1. Encouraged by the win in the Doubles, Jake Dembo took charge in the Singles with a solid 6-2, 6-0 victory.

The 11/u Boys won over the ACT in the Final, claiming the Rod Laver Cup and Australian Teams Championship title 2-0.

Tennis West Talent Development Manager and 11/u Boys coach, Damien Ward, says the boys have gained far more than just a National title from their week in QLD.

“The boys have played some outstanding tennis this week and winning the Boys 11/u Australian Teams Championship title is something to be very proud of,”

“Being so competitive against so many top ranked players is a credit to the boy’s commitment to training and preparation for the event,”

“Winning aside, playing in these top tier events is so important for the development of our young athletes as it provides them with great insight in to what it takes to perform at an elite level,” Ward said.

Tennis West CEO Mr Michael Roberts says WA’s recent success at the Australian Teams Championships is testament to the elite training environments available to the players and to the hard work and commitment of everyone involved.

“The high performance training environment available to our top performing junior players continues to produce outstanding results on both the national and international stage,”

“Bringing home half of the titles available at the Championships says a lot about the quality of our players and importantly speaks volumes to the worth of our highly valued coaches,”

The Australian Team Championships is the most prestigious teams event open to 11/u and 13/u athletes from across Australia and the Asia-Pacific region. 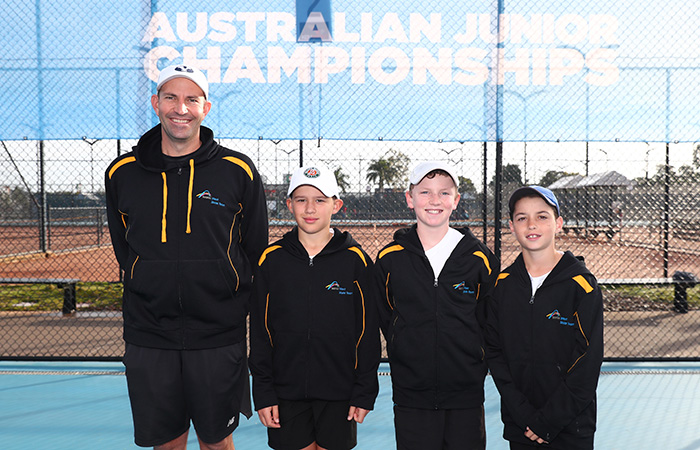