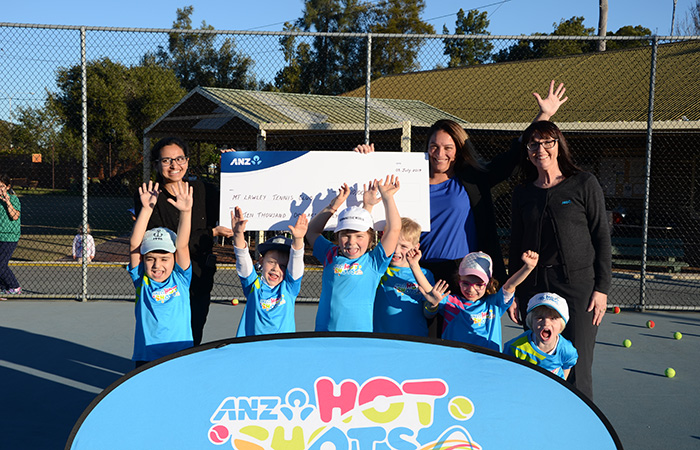 The club was the second WA tennis club to be awarded the funds through the ANZ Tennis Hot Shots community grant program in 2019.

The much needed funds will go towards the installation of spectator shading set to improve the tennis experience for everyone.

Outgoing Mount Lawley TC President Simone Firns said the club had an incredibly strong junior program and that the installation of spectator shading had been on the Board’s agenda for quite some time.

“The Board have been wanting to install spectator shading for quite some time now,”

“Our junior program is incredibly strong and they come with a very supportive spectator base which includes parents, grandparents and siblings,”

“It’s definitely been a priority of the club to improve the spectator experience and the ANZ community grant has been instrumental in making this a reality for the club,” Firns said.

Finding out about the ANZ community grant through the monthly Tennis West newsletter, Firns says the application process was very straight forward. Furthermore, Firns states that the club is incredibly grateful for the support of ANZ through the community grant program.

“So many grant applications are unbelievably labour intensive,”

“The ANZ community grant application took no time at all,”

“I was able to complete the application independently which made the process so much easier,”

“I was at work when I got the call from ANZ to say that the club had been successful, I was over the moon,”

“Knowing that we could finally install the much needed shading was such a win for the club,”

“There’s no doubt this project would have been realised without the generosity of the ANZ community grant,” said Firns.

“We’re excited to present Mount Lawley TC with this ANZ Tennis Hot Shots community grant. The club is a wonderful part of our community and are a great supporter of grass roots tennis.”

“We are grateful for ANZ’s ongoing support of tennis and the ANZ Tennis Hot Shots program and their commitment to growing the game from the grassroots level up. We’re excited for Mount Lawley Tennis Club and we know they will make the most of this wonderful opportunity.”

20 tennis clubs or venues from around the country were awarded grants through the ANZ Tennis Hot Shots community grants program. North Beach TC were also included in the winners from WA.

To find out more about the ANZ Tennis Hot Shot’s community grant program you can follow the link here: https://communitygrants.anz.com/tennis-grants