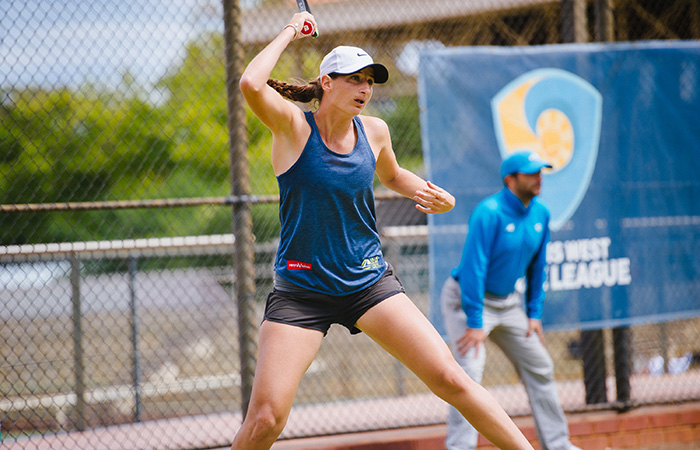 After 14 rounds of home and away fixtures, the Semi-Finals of the Tennis West State League will kick off this Saturday, with some of the State’s best tennis players all vying for a place in next week’s Grand Final, where eventual winners will enjoy bragging rights and a share of $20K in prize money.

Having not lost a rubber since the fifth round of the 2018/19 Women’s State League season, Cottesloe Tennis Club finished the home and away season on top of the leader board, boasting 10 wins from14 matches. Cottesloe will play on home turf against fourth placed Hensman Park Tennis Club, for the first of the Semi-Final match-ups, in what promises to be a tightly contested and thrilling match. Both teams feature some of the State’s most talented and exciting up-and-coming junior players, and will be relying on the youth and tenacity of these young guns to secure victory.

Cottesloe Captain Lexie Weir and teammate Natasha Camer-Pesci have had standout seasons, with the pair both enjoying 10 singles wins from 12 matches. They will likely be joined by WA powerhouse Maddison Inglis and rising stars Ruby Culley and Lauren Nikoloski in an attempt to secure the much-needed win. Hensman Park, have also capitalised on the energy and enthusiasm of their junior players with Tara Gilich and Nadia Rajan taking the lead and clocking up some impressive wins throughout the season.

In a rematch of last year’s Women’s State League Grand Final, second placed Royal Kings Park Tennis Club will play with the home ground advantage over third placed Blue Gum Park Tennis Club. Aiming to secure a repeat finals appearance, and back-to-back Grand Final wins, the Royal Kings Park team will look to the lead of current Pro Circuit player, Jelena Stojanovic and former professional player Bojana Bobusic, who was last year named Women’s MVP of the competition. However Blue Gum Park are no stranger to a Finals campaign, and will be looking to secure a third finals appearance in a row, with talented tennis player and professional boxer Sheridan ‘Smasher’ Currie and professional tennis coach Marisa Gianotti adding depth and experience to the team.

Narrowly missing out on the number one position of the home and away season, second placed Hensman Park Tennis Club, will play third placed Royal Kings Park Tennis Club, with this fixture featuring some of the season’s best performing players. Royal Kings Park Captain, Sam Ashenden comes into the match boasting 11 singles wins from as many appearances. However Ashenden will face tough competition in ATP Professional Brydan Klein, who brings invaluable grand slam experience to the match, and will no-doubt be looking to continue his 8-0 winning streak. Klein is also a powerhouse in doubles, winning all 7 doubles matches he has played this season. The other key match-up will between Hensman Park Captain Zach Itzstein and Jake Robinson from Royal Kings Park, who have both had solid performances throughout the season.

Tennis West Competitions and Tournaments Manager,  Loretta Hughes says the State League competition is an essential pathway for the development of elite juniors that at the same time provides clubs with the opportunity to attract both former and current professional players to local clubs.

“The level of tennis played at State League provides a highly competitive playing environment for both professional and up-and-coming juniors,”

“It’s an essential pathway for the continued development and retention of our elite junior players,”

“Aside from the benefits afforded to junior players, the State League competition also encourages clubs to invest in professional players, who bring invaluable experience and leverage to a club environment. This has a profound impact on the vitality and sustainability of our clubs”  Ms Hughes said.

Tennis West State League is the pinnacle team competition in Western Australia for professional and up and coming elite athletes. Fourteen Men’s and Women’s teams compete over 14 home and away rounds for a share of $20K in prize money.

The State League Semi-Finals will commence at 12.30pm