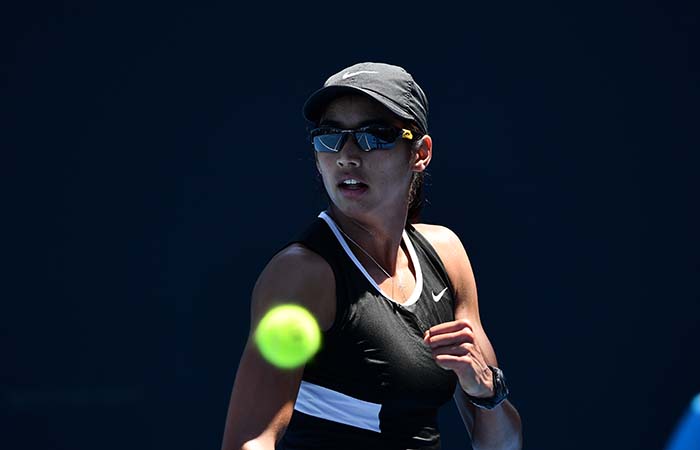 At just 23 years of age, the right-handed powerhouse from Booragoon, is no stranger to success. Having won her first professional title at the 2015 Egyptian ITF event in Sharm El Sheikh; Sharma also lays claim to the 2017 Targu Jiu ITF and Graz ITF.

2018 was a year of stellar performances from the young gun who, following an Australian Open Women’s Doubles Wildcard entry, commenced the year with a first round appearance alongside partner Belinda Woolcock. Success continued throughout the year with Sharma winning the Baton Rouge ITF, Gatineau ITF and Cairns ITF titles, in addition to a noteworthy finals appearance at the Oralano ITF. Undeniably, Sharma’s future look’s bright.

But where did it all begin for the humble athlete who is just as talented on court as she is off? Sharma admits that she can barely remember life without tennis or physical activity. Growing up in Singapore with younger brother Ashwin and sister Tara, Sharma’s love of the sport grew from an active lifestyle encouraged by her parents, Dev and Susan.

“My Dad was always passionate about keeping us active. He was a National high jumper for Singapore and moved us to Australia when I was about seven so we could enjoy more balance between academia and physical activity” said Sharma.

“Astra has always done more than the rest. During her time at the Academy she always showed independence in her training. This trait has remained and is something we notice every time she returns to Perth,” said Roberts.

State Academy Coach Len Cannell said that Sharma is such a positive role model for the younger female players coming through the Academy.

“Astra has set the bar exceptional high for our girls coming through the Academy. Most of her fitness records still stand, but it’s more than that. She’s an exceptional athlete that is driven, respectful and above all appreciative. It’s her performance both on and off the court that we encourage all of our girls to aspire to,” said Cannell.

The self-driven superstar finished Year 12 with aspirations of joining the Pro Circuit. However a broken ankle left Sharma sidelined until a chance meeting with Associate Head Tennis Coach, Aleke Tsoubanos of Vanderbilt University in Tennessee. That meeting instigated a whirlwind move to the other side of the world where Sharma went on to play five years of College Tennis, gaining a degree in Medicine, Health and Society.

“When I first saw Astra play, she took my breath away. Her court presence, most notably her ability to move so quickly, and so gracefully. It’s what set her apart from the rest,”

“And she’s come such a long way. Her commitment is unwavering, she shows complete dedication to doing whatever it takes to improve her tennis IQ. She trains, she plays, she reads, she watches; she’s like a sponge. Astra has squeezed her Vanderbilt experience dry and it’s been instrumental to her success,” said Tsoubanos.

“I was 17 and not very good” laughs Sharma “One minute I was playing a tournament in Melbourne and the next thing I knew, I was signed and moving to the other side of the world. It doesn’t usually happen that quickly, it was such a blur,” said Sharma.

Sharma credits the key to managing the life changing move, whilst harnessing the most from the opportunity, has been in creating balance. A formidable family trait, and one that’s been reinforced by Sharma’s U.S College Coach, Geoff McDonald from Vanderbilt University.

“It’s so important to be gentle on yourself and to know that it’s OK to take it easy. Geoff always says that the best way to get better is to not get hurt. I respect him a lot, he’s like a father figure to me so I’m always heeding his advice,” said Sharma.

Sharma is adamant that if you don’t find balance, you’ll end up either burnt out or injured.

“When I’m home in Perth, I love hiking through National Parks and kayaking on the Swan River. When I’m not preparing for tournaments, Mum and I enjoy the foodie scene, we love exploring new tastes together” said Sharma.

“Geoff challenges me both on and off the court. He pushes me to read as much as I can. It’s now part of how I prepare for, and come down from, matches. At the moment I’m reading Sapiens by Yuval Noah Harari, it looks at how humans have evolved over time. It’s providing some great insight,” said Sharma.

Sharma’s speedy rankings rise, suggest that, much like her whirlwind signing to Vanderbilt, that she’s the girl for making things happen quickly. In 2015, Sharma held a WTF ranking of 787, which, following injury, fell dramatically in 2016 to 974. However Sharma managed to slice her ranking in half to 409 by June 2018, before acing her way to an all-time WTF ranking high of 230.

Tsoubanos notes the remarkable rise considering Sharma has only been full time on the tour since June 2018.

“It’s really exciting and rewarding to see Astra doing so well. To be honest, it’s no surprise to us. We know how hard she works,”

“She’s hungry and she’s determined to continue her development as she forges her way into the higher echelons of the rankings. There’s no doubt she’ll hit WTA’s top 100 and be competing in major Grand Slam draws,” said Tsoubanos.

And if Sharma’s ranking rise isn’t testament enough, then you need look no further than her long list of accolades from Vanderbilt University, that Tsoubanos says, is what makes her a stand out.

“Astra’s contribution to Vanderbilt is almost impossible to quantify. She was an incredible student-athlete, one of the genuinely kindest souls I’ve had the pleasure to coach in 12 years,”

“She’s an incredible leader, a stand out mentor, an amazing player and an ultimate competitor who is fiercely loyal to those in her corner,”

“Then there’s the fact that Astra is the most decorated women’s tennis player in Vanderbilt’s history, and arguably, in the history of the University’s athletic department,’ said Tsoubanos.

In 2015, Sharma was awarded Vanderbilt Universities Athlete of the Year, the NCAA Tournament MVP and SEC Tournament MVP. In 2016 she was named Ohio Valley’s Player to Watch and in 2017 was the number 1 seed at the NCAA Doubles Tournament in addition to being named the 2017 SEC Player of the Year.

So what does the future hold for the young guns who’s already achieved so much? Sharma attests to the fact that she won’t be slowing down any time soon, determined to continue her impressive trajectory as she storms her into her first Grand Slam, on her way to the top.

“I’ve never needed anyone else’s encouragement or motivation. I know what I want and the work that’s required to get there. There’s no stopping me now,” said Sharma.

Sharma joins Thanasi Kokkinakis as the only Australian to qualify for the Australian Open main draw through qualifying.