Over the summer, Tennis Victoria has continued to recognise amazing volunteers who have contributed so much to their local clubs, associations, and communities. Tennis Service Awards have been presented to Laurie Anderson and Neil Ozane from the Woodvale Bushrangers Tennis Club, Craig Farrar and Kevin Freeman at Wodonga Tennis Centre and Bundoora Tennis club’s Sue Taylor. 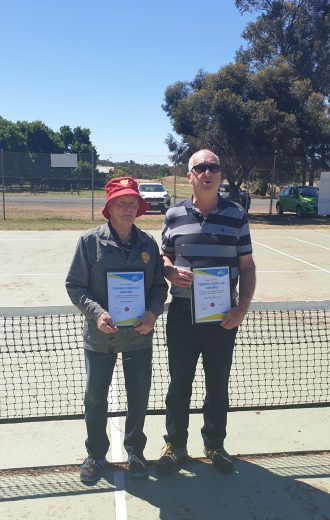 Laurie Anderson has been an integral part of the Woodvale Bushrangers Tennis Club for over 30 years. He was instrumental in establishing the club and building the courts and his involvement includes playing and roles as President, Secretary, Treasurer and General Committee Member. Laurie has also been the Woodvale representative at the Eaglehawk & District Tennis Association. He’s dedicated countless hours to lawn mowing, facility maintenance, BBQs and more.

Neil Ozanne has also been a great contributor to the Woodvale Bushrangers Tennis Club. He was recognised by the club with Life Membership in 2010. Over the years Neil has helped with juniors and the Hot Shots program and represented the club on the Recreation Reserve Committee of Management. Neil provides the link between the tennis community and the wider Woodvale community. He keeps an eye on the facility and organises for things to be fixed before anyone knows they are broken. Valued for his volunteering, Neil is also famous for his home made rissoles. Kevin Freeman has been a committee member of the Wodonga Tennis Centre since 2002/03, and his main role has been grounds supervision – no easy task on one of the largest grass court facilities in Australia. Kevin was also a part of the committee that brought Country Week to Wodonga. He coordinates Thursday night tennis, is part of a subcommittee to run Saturday morning juniors tennis and is always on hand to help with tournaments and fundraising. 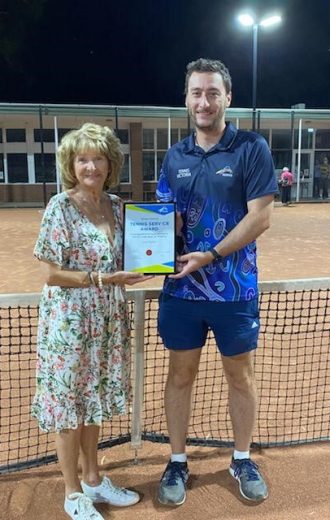 Sue Taylor joined the Bundoora Tennis Club in the early 1990s and became a stable member of the executive committee. After a stint as President from 1993-1995, Sue served as treasurer from 1994 through to 2021. Sue has been involved in every key event held by the club during her time, including 50th and 60th anniversary celebrations, Premier League & ATL, AFL Grand Final functions, Open Days, Trivia Nights and more. Sue’s contributions are invaluable, and she has passed on her knowledge as she mentors new committee members.

Congratulations to Laurie, Neil, Craig, Kevin and Sue on your outstanding contributions to your tennis clubs and communities.

If you have a volunteer at your club who deserves recognition, you can nominate them for a Tennis Service Award here.