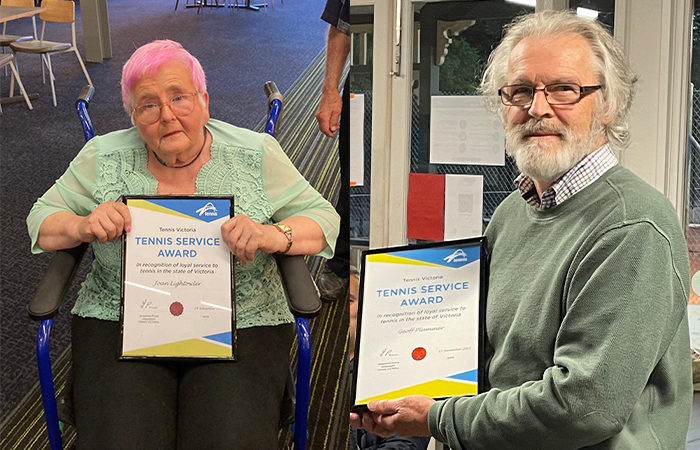 Tennis is in full swing and so is the recognition of tennis volunteers. Recently Rowville Tennis Club’s Joan Lightowler and East Camberwell Tennis Club’s Geoff Plummer were both awarded Tennis Service Awards.

Geoff Plummer is the equal longest serving President of the East Camberwell TC and has been a major driver of the clubs’ membership and participation. He has spent over half his time at the club as senior executive member of the committee.

A major legacy of Geoff’s is overseeing the biggest capital expenditure program in the clubs history to ensure significant upgrades to the facility. He has also been a senior convenor for the teams entered into the Eastern Region Tennis competition for most of the last twenty years.

Also a committee Convenor, Joan Lightowler has been the backbone of the Rowville Tennis Club for 40 years. She joined the club in 1980 for a sense of belonging when new to the area taking on everything except President and created life long friendships in the process.

Joan’s biggest passion is working with the juniors and helping them develop into passionate tennis players themselves. She can always be found at the club on a Saturday morning. She makes countless donations of time and goods and is always there to help.

On receiving here award Joan said “It’s been an honour to be presented with the Tennis Service Award and I feel very privileged to be involved with such wonderful and dedicated people at our club.”

Thank you Geoff and Joan for your contributions to tennis in Victoria. You are what makes tennis clubs great.

Find out more about Tennis Victoria’s Recognition Program and officially thank a volunteer from your club here.