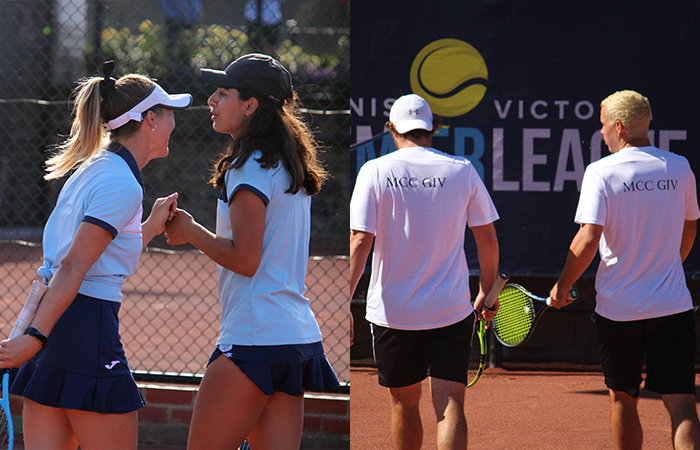 The Tennis Victoria Premier League season is about to go up another gear, with the home and away season coming to an end. The semi-finals for the highest level competition in the state is set to commence on Sunday.

Beaumaris (women) and MCC Glen Iris Valley (men) lead the charge into the final after finishing on top of their respective ladders. The final round saw last-minute jostling of positions, which cemented the 2019 grand finalists.

The Sunday semi-final showdown will see Kooyong face off with Royal South Yarra in both the men’s and the women’s after both teams finished second and third in each division respectively.

The opening weekend was not met with beautiful spring weather but with cold and wet conditions across the state. Round 1 for the men, at Heatherdale Tennis Club, was eventually called off due to rain, while on the other side of the city Hume Tennis and Community Centre hosted the women. The women’s round was completed despite two rain delays. Both Beaumaris and Kooyong proved too strong for Hume and Royal South Yarra, with clean sweeps signaling their intentions for the season.

Round 2 saw the first Super Round take place at Beaumaris Lawn Tennis Club. The men were able to get their campaigns underway, with defending champions, MCC Glen Iris Valley defeating Heatherdale and Kooyong proving too strong for Bundoora-RMIT. The Beaumaris and Royal South Yarra tie finished even 3-3, with Royal South Yarra just claiming a memorable win on games 59-47.

For the women, Hume got their season to a 1-1 win-loss following a tight victory over MCC Glen Iris Valley, while Royal South Yarra succumbed to home side Beaumaris. Spectators were treated to a fantastic exhibition of tennis as the Beaumaris and Royal South Yarra match up had five of the six rubbers go the distance.

For Round 3, the next Super Round had a wonderful Melbourne night complimented with the great hospitality of Royal South Yarra Lawn Tennis Club. Straightforward wins for the men’s Bundoora-RMIT and Kooyong sides were met with another ultra-competitive affair against MCC Glen Iris Valley and Royal South Yarra. The home side secured both doubles rubbers, however, were unable to capitalise by narrowly winning just one of the singles matches (Gael Courbard def Aaron Addison 4-6 6-4 [11-9]).

The home side’s women’s team saluted with victory over MCC Glen Iris Valley. They produced a commanding run with three out of four singles rubbers. Despite losing on games, Beaumaris got the better of Kooyong to maintain their position on top of the ladder after round 3.

Round 4 was another picturesque day as the women took to the clay at MCC Glen Iris Valley Tennis Club and the men ventured to Bundoora-RMIT. Kooyong and Royal South Yarra were far too strong for MCC Glen Iris Valley and Hume. But the weekend belonged to MCC Glen Iris Valley ‘Super Coaches’, Soph and Alice, winning their spot of the side of the court for the doubles rubbers. Watch how much they enjoyed the day below.

For the men, Bundoora-RMIT put on a great day for players and spectators and the tennis also provided some highlights. MCC Glen Iris Valley dominated Beaumaris, while 5-1 victories to both Kooyong and Royal South Yarra had teams heading into round 5 with ladder positions still up for grabs.

The stage was set for Round 5 of the competition, with the weather turning it on while playing under lights at Kooyong. The night saw the biggest crowd attend a Premier League round this year, which was nicely complimented the best chicken sandwiches ever.

With all spots up for grabs in the finals, the men and women were all vying for one of the three places.

The men’s match-up of the night between home side, Kooyong, and MCC Glen Iris Valley culminated in some intense matches of tennis being played, including three of the rubbers ending in tie-breaks.

The teams each shared a rubber in the doubles, with Mott/Luczak d Bidmeade/Jones 6-3 7-5 before Kooyong squared when Polmans/Whittington d Bolt/Reid 6-4 3-6[11-9].

For the women, Beaumaris spent the night looking to stay on top of the ladder and progress straight through to the grand final in which they managed.

The women split the doubles after MCC Glen Iris Valley took the points in a tie-break set (Parnaby/Baric d Barry/Ruhrig 3-6 6-2[10-6]) and Beaumaris claimed the other comfortably (Papazyan/Thompson d Ah San/Tinker 6-1 6-3).

The Beaumaris women held their nerve throughout the singles rubbers, claiming three out of four in tie-break games to progress directly through to the grand final.