As Dylan Alcott calls on all Australians with a disability to try tennis, we look back at his remarkable sporting story. 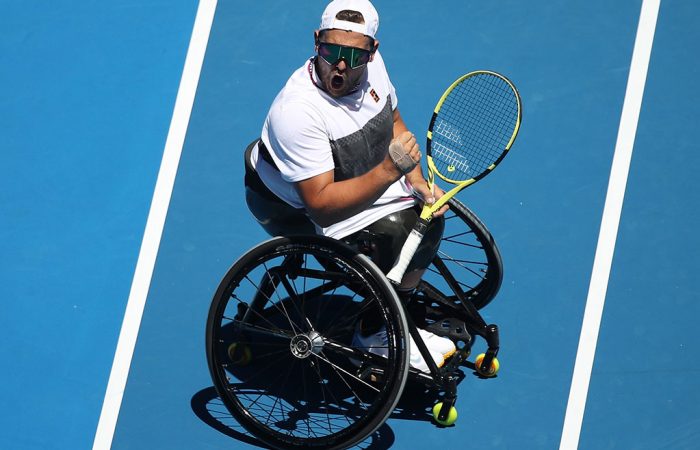 Dylan Alcott was no stranger to the pressure as he took to Rod Laver Arena on Australia Day this year to contest the quad singles final of his home Grand Slam.

Nor was the excited audience a stranger to Dylan Alcott.

The popular Melburnian had, after all, memorably claimed the four previous Australian Open titles and won dual Paralympics gold medals at Rio in 2016, adding to his basketball tally (after gold medal success with the Australian Rollers at the 2008 Beijing Paralympics and silver at 2012 London).

And if that wasn’t enough to acquaint the crowd with the effervescent Alcott, there’s also his many other roles in the spotlight: television host, radio presenter, tennis commentator, motivational speaker, philanthropist and brand ambassador are among the many held by the 28-year-old.

But it was this stage that would carry the greatest impact. Alcott had featured in the first Grand Slam wheelchair final ever to be held on a centre court when he defeated Andy Lapthorne at Rod Laver Arena for the 2017 title; two years on, there was another breakthrough when the 2019 showdown with long-time rival David Wagner was broadcast live nationally on Channel 9.

“That win meant the most to me,” said an emotional Alcott. “Because if you put yourself out there, it puts more pressure on you. It really does. To broadcast it live to the world, never been done before in a final, that’s huge for the movement of parasports, everything that I believe in.”

That fans were treated to such a superb-quality final – Alcott down 2-5 in the second set against Wagner before he secured the 6-4 7-6(2) victory – only added to the positivity it generated.

“That was the highest-quality tennis,” said the five-time champion, who also claimed the Australian Open doubles title with his close friend Heath Davidson. “To be able to broadcast (that), it meant a lot.”

It wasn’t the first time that Alcott had shown such resilience at his home tournament; battling a bacterial infection in 2018, he left his hospital bed on the day of the final to win a fourth singles title at Melbourne Park.

Fortitude is a quality Alcott has long required. Born with a tumour wrapped around his spinal cord in 1990, he underwent major surgery when he was just a few weeks old, resulting in paraplegia. While support from family and friends was plentiful as Alcott grew up in bayside Melbourne, there were also a myriad of challenges. Experiencing bullying and loneliness as a teenager, an overweight Dylan also grappled with depression.

“On the whole, I knew my life had value. And yet I couldn’t quite be comfortable with who I was,” Alcott writes in his autobiography Able. “When you are really different from everyone around you and you don’t have any role models whose path you can follow, well, you can’t hold out against bullying forever.”

Sport provided a positive turning point, Alcott enjoying swimming and basketball while dedicating a large amount of time to his tennis. After peaking at world No.4 in the ITF junior rankings in 2008, the natural extrovert thrived for a time in team sports (at age 17, he was the youngest member of the Australian Rollers to claim gold in Beijing), before returning to his first sporting love with an important directive.

“When I made the switch to play tennis from basketball, I remember I said to Tennis Australia, ‘I really want you to treat me like a professional tennis player first and foremost, who just happens to have a disability,’” said Alcott. “I wanted to get treated like Nick Kyrgios did, or Thanasi Kokkinakis, or Sam Stosur or Lleyton Hewitt.”

Combining that attitude with an impressive work ethic reaped big rewards for the gold-medal winning Alcott, also a nine-time Grand Slam champion across singles and doubles as well as a long-time world No.1.

Along the way, Alcott has accumulated a string of enviable experiences. A hitting session with Hollywood star Will Smith during AO2018 was followed by a royal encounter at Wimbledon, when Alcott met Kate, Duchess of Cambridge and Meghan, Duchess of Sussex.

It’s unsurprising that there’s also huge support from fellow players, with world No.1 Novak Djokovic among the many thrilled by the Australian’s success. “I’ve said it before, these guys are heroes to me, they really are,” Djokovic related at the Australian Open. “They make the game of tennis more beautiful and more unique because of what they do and how they do it.”

As similar accolades flow from a growing fan base, nothing means more to Alcott than the inspiration he’s provided to young people facing similar challenges to those he also experienced.

“I remember as a 14-year-old lying in bed and all I wanted to do was make it in the mainstream in some way,” he tearfully recalled after lifting his latest Australian Open trophy. “I wanted to show we could be normal people, get a job, have a partner … I just wanted to see people with a disability succeeding in the mainstream.”

With a leading role on Channel 9’s The Footy Show following his latest Grand Slam titles, Alcott has clearly done that. And as he continues to challenge perceptions on disability and maintains a focus on his company, Get Skilled Access, the busy Alcott has become the role model he desperately craved as a teenager.

Never was it better demonstrated than in the recent Australian Open final, when thousands of fans supported him at Rod Laver Arena and countless more watched via the live broadcast.

“I’m the lucky one who has it at the moment,” said Alcott. “The next generation of young athletes, other sports, they deserve the same thing. They train just as hard as the Roger Federers, Usain Bolts, Michael Phelpses, whoever it is. It means the world to me to be able to cut through, break that glass ceiling. Hopefully it flows on for years to come and this becomes the norm.”

As the profile of wheelchair tennis continues to soar, many would say that inspiring reality has already unfolded.

If you would like to learn more about tennis for players of differing abilities, please contact [email protected].