World No.5 Alexander Zverev secured a 3-1 Davis Cup win for Germany as he overcame Nick Kyrgios in straight sets. 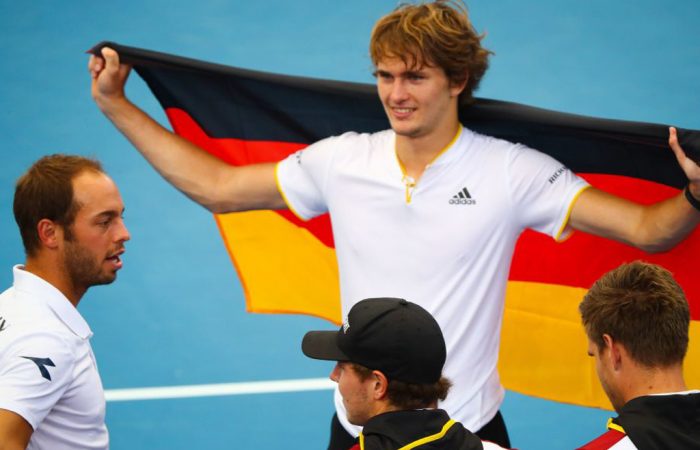 Australia has lost the Davis Cup first-round tie in Brisbane after Nick Kyrgios was beaten in straight sets by world No.5 Alex Zverev, giving Germany an unbeatable 3-1 lead.

Australia is relegated to September’s World Group play-offs while Germany move through to April’s quarterfinals.

Australia had to win both reverse singles rubbers on Sunday to claim the tie after doubles pairing John Peers and Matthew Ebden lost in five sets to Struff and Tim Puetz on Saturday.

Zverev stood tall on Sunday to ensure Germany won through to the quarterfinals for the first time since 2014.

The stage had been set for an epic clash between rising stars Kyrgios and Zverev.

And while Kyrgios started with an ace and cruised through his first service game, he looked out of sorts against the German and never found his rhythm.

Kyrgios appeared to be struggling with a right elbow ailment, taking a time-out for treatment while leading 4-3 in the second set.

Kyrgios was clearly restricted by the second set tiebreak and his frustration quickly grew.

“My biggest weapon was not really there and that affects the rest of my game. It’s just tough not to be able to go out there and give your best performance,” the No.1 ranked Australian said.

Kyrgios made 34 unforced errors against the big-serving Zverev, who made him pay.

“It’s just tough. I had one eye on the Davis Cup tie throughout all the summer,” Kyrgios added, explaining he’d prioritised the team title above all else.

“I’d have given up my Brisbane title to have won this tie.”

The German’s serve proving the difference: he slammed 15 aces and enjoyed a 71 per cent first serve percentage.

What was supposed to be the rubber of the tie became one way traffic after Zverev blew away Kyrgios to take the first set in 23 minutes.

Kyrgios tried to hang in but all but was unable to gain an advantage in the second set tiebreak.

Zverev made short work of Kyrgios in the third set to secure a win and improve his head-to-head record to 5-2 against the Australian No.1 in all competitions.

Kyrgios – who had won six of his past seven rubbers – now has a 9-6 Cup singles record while Zverev improved his tally to 3-4.

Australia, who qualified for last year’s semifinals and had won their past three home will now compete in the World Group Play-offs from 14 to 16 September to maintain their position in the top eight.

Germany will play either Great Britain or Spain in the quarter-finals.