Following yesterday's retirement of unorthodox Wimbledon champ Marion Bartoli, we pay homage to the most unconventional players in the game today.

The tennis world was given a shock yesterday when Marion Bartoli announced her retirement just a month after claiming her first Grand Slam crown at Wimbledon.

In addition to that major triumph, Bartoli was as notable – if not more – for her unorthodox style, both in practice and on the match court.

This Friday, we pay homage to the Queen of Quirk with our top 10 list of the most unconventional tennis players on tour today.

The Romanian looks like a fairly typical pro when she plays her backhand. But it’s when she lines up for a forehand that it gets funky. Niculescu plays a double-fisted forehand – unusual in itself – and is also a regular proponent of the rare chopped, under-spin, single-handed forehand, lashed with plenty of slice, and sometimes side-spin. You can see her play the shot in practice in the video below.

Like most Frenchmen, Benoit Paire plays with plenty of flair. But rarely do players end up on the highlights reel as often as he does. He owns every shot in the book and is not afraid to break them out regardless of the scoreline – here is one of his better efforts, against David Ferrer in Auckland.

Stepanek is certainly an unconventional player on court, with his energetic all-court style providing a contrast to the baseline play that characterises the tour today. Yet it’s his post-match celebrations that really make you sit up and take notice – take a look at his reaction to winning the Washington title in 2011.

The German does everything you wouldn’t expect, beginning by being a left-hander – a rarity in the upper echelons of the women’s tour. Kerber plays a round-arm forehand without much use of her non-dominant arm, switches between crab-like defence and blinding offence with one stroke, and will find inventive ways to get almost every ball back. We saw this and more – including moon-balling – in her match at Indian Wells this year against Caroline Wozniacki. The point beginning at the 19-minute mark is must-watch material.

One of the more spectacular players on tour, Gael Monfils’ incredible athleticism, flexibility and natural talent has seen him produce some jaw-dropping tennis over the years. Here is a succession of his crowd-pleasing points at the 2011 US Open. 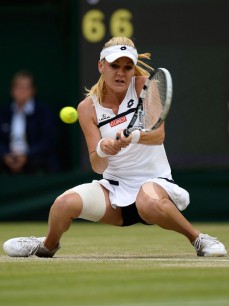 One of the increasingly recognisable strokes in the women’s game is Radwanska’s crouch backhand, a reflexive shot played – particularly on the slick lawns of Wimbledon – in response to the brute power she often finds herself up against. Great flexibility and strength allow her to squat incredibly low to play this shot, while her sublime hands help her expertly redirect the ball from an awkward position. Her ability to improvise is also noteworthy, as evidenced by the video below.

The epic dreadlocks make him instantly recognisable among everybody else on tour. And his exuberant style of play simply completes the picture. Brown brought his unorthodox style to Wimbledon’s lawns in 2013 with great results – check out this stunning volley en route to his win over Lleyton Hewitt in the second round.

The young Australian has flummoxed many an opponent over the past few years with his unique brand of tennis – flat, off-pace forehands, sliced shots, sharp angles and sudden, unexpected injections of power. Tomic especially likes showing off his vast array of strokes on the game’s biggest stages, as he did in the match below on Rod Laver Arena at Australian Open 2012.

Much like Tomic, you never know what you’re going to get when Alexandr Dolgopolov takes to the court. The Ukrainian has almost unrivalled flair, with wicked athleticism allowing him to pull off some incredible shots while his gifted hands help him control the ball even when contorted into the most challenging positions. Those hands also give him great control over the drop shot, which he uses to excellent, and unexpected, effect in this French Open match against Viktor Troicki.

We couldn’t conclude a list of the most unconventional tennis players and not top it with Bartoli. The sport is losing one of its kookiest and most unorthodox champions following her unexpected retirement, and we’ll no longer witness her ultra-aggressive double-handed play and hyper-energetic rituals – fist pumps, shadow swings and on-the-spot running – between points. She’s also notable for her intense, unusual practice sessions, replete with resistance-band contraptions designed by her father and coach Walter. Check it out below.