Stosur into French Open third round

UPDATE: Sam Stosur will face Jelena Jankovic in the third round at Roland Garros after straight-setting Frenchwoman Kristina Mladenovic in Paris on Thursday. 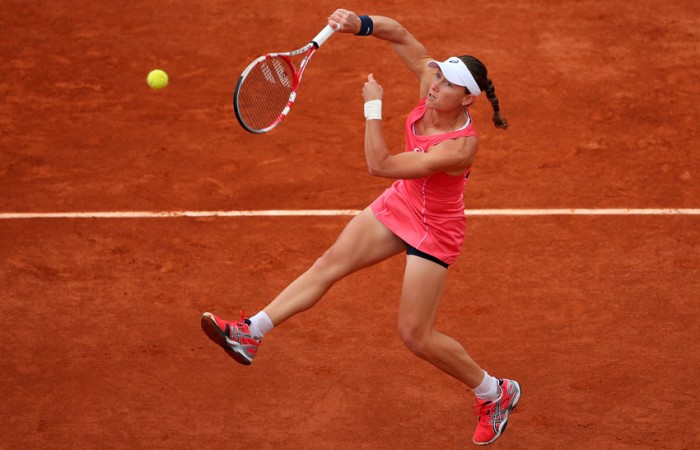 Sam Stosur overcame a tough early battle and a rain delay to beat unseeded local Kristina Mladenovic and reach the third round of the French Open.

While Stosur’s opening-round victory over Kimiko Date-Krumm was effectively a stroll on the clay for the Australian world No.9, she had to dig a litter deeper in Thursday’s match on Court Philippe Chatrier.

But ultimately she was much too strong in posting a 6-4 6-3 win to set up a third-round clash with Jelena Jankovic.

The match began under threatening skies in the French capital and Stosur took some time to get warm in cool conditions.

She framed a few shots early and Mladenovic proved a stubborn opponent with games on serve until the Australian clinched the first break of serve when up 5-4.

Having squandered three set points, Stosur brought up another with a Hail Mary volley from close range that just caught the line and Mladenovic double faulted to surrender the set.

The second set was more lop-sided and Stosur was coasting towards victory before the rain arrived to halt her momentum when she had just taken a 4-1 lead.

The players returned to court an hour-and-a-half later and there were a few nervous moments as Mladenovic tried to fight back, but Stosur held serve twice to secure the win.

Stosur was pleased with what she viewed as a strong second-round hit-out.

“I thought the first set had good quality from both of us and it was very close,” Stosur said.

“We both maybe had a couple of opportunities on serve to break early and didn’t get it. That 5-4 game was obviously really important for me to kind of get a real hold on the match and I played some good points.

“Maybe got a little bit lucky with that volley, whatever, the thing was down the line. I was able to break and really felt like I kicked on and then, obviously, with the rain.

“I thought it was a nice, solid performance.”

The 29-year-old, a semifinalist at Roland Garros last year, is optimistic at going deep into the draw in Paris despite a frustrating year marred by injury and form concerns.

She faces a tricky third round opponent in 18th-seeded Serbian Jankovic, who wrapped up a 6-3 6-0 win over Spaniard Garbine Muguruza before the rain hit on Thursday morning.

Stosur said she always found it tough playing against Jankovic.

“We played about four or five weeks ago in Stuttgart and she beat me there,” she said.

“We played in the semis here in 2010, so we certainly played enough times on all different surfaces. I’m certainly expecting a tough match.

“I have to be ready to work hard and hopefully play as well, if not better, than what I have been doing.”