Jelena Dokic and Anastasia Rodionova both fell at the Sony Ericsson Open on Tuesday in what was a disappointing day in Miami for the Aussies. 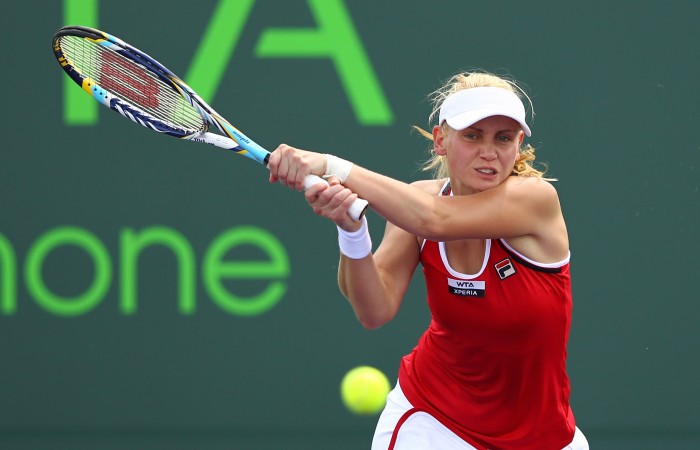 Jelena Dokic and Anastasia Rodionova have fallen on Tuesday at the Sony Ericsson Open, leaving Australia 0-2 on the second day of play at the combined ATP/WTA event in Miami.

Dokic, who had withdrawn early in her first round match at the Indian Wells tournament last fortnight, fell in straight sets to Australian Open 2012 quarterfinalist Ekaterina Makarova.

It was a tough draw for Dokic, who improved as the match wore on before going down 6-1 7-5 to the 41st-ranked Russian.

Dokic’s serve, which has troubled her throughout 2012, was again part of her undoing in her first round match against Makarova on the Grandstand court at Crandon Park.

The world No.119 dished up 11 double faults throughout the one hour, 20 minute contest, and won just 29 per cent of points behind her second delivery.

Makarova moves through to a second round clash against compatriot Anastasia Pavlyuchenkova, seeded No.19 in Miami.

Meanwhile, another Anastasia, this time Rodionova, fell in the final round of qualifying to American wildcard Madison Keys.

Keys, a promising 17-year old talent and who won the USTA’s wildcard play-off for a berth in the main draw at Australian Open 2012, recovered from a set down to beat her more experienced opponent, 2-6 6-1 6-4 in just shy of two hours.

Rodionova, like Dokic, was hurt by her serve, sending down seven double faults to only one ace. Keys, however, enjoyed far more success on serve, her three double faults more than made up for by five aces, as well as winning almost three-quarters of points on her first serve.