Sam Stosur has fallen in the third round at the ATP/WTA event in Indian Wells, losing an epic battle against No.30 seed Nadia Petrova. 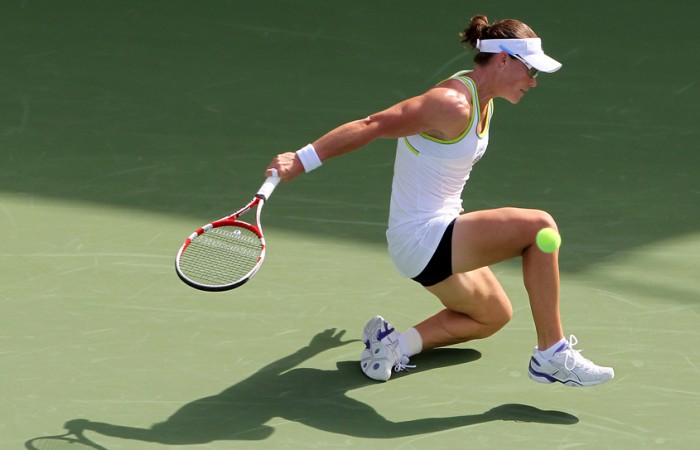 Sam Stosur has fallen in the third round at the BNP Paribas Open in Indian Wells, losing to dangerous No.30 seed Nadia Petrova.

In the pair’s last encounter – which came in the third round at the 2011 US Open – Stosur defeated the Russian in the longest women’s match in the Open Era at Flushing Meadows.

Yet this time around it was Petrova who came out on top in a three-set epic, winning 6-1 6-7(6) 7-6(5) in two hours and 46 minutes beneath sunny skies on Stadium 1 at the Indian Wells Tennis Garden.

“On her day she can go out there and beat anyone,” Stosur said of Petrova, a former world No.3.

“She has a very big serve if she’s confident with it and if she’s making a lot of first serves she’s pretty hard to break. I got more opportunities as the match went on. If she’s hitting her forehand alright and is serving well she is very dangerous.”

The opening stages of the match, however, did not indicate that a classic was brewing like the one they played out in New York.

Petrova broke Stosur in her first service game on her way to a 3-0 lead, and wrapped up the set in the seventh game thanks to three consecutive aces. She finished the set with seven aces and no double faults.

When the Aussie fell behind 3-1 in the second set, the match looked to be all but over. But in an impressive turnaround, Stosur dug herself out of that whole and firmly inserted herself into the contest.

Dancing around a backhand in the seventh game, she thumped a huge forehand winner down the line to lead 4-3, moving ahead on the scoreboard for the first time in the match.

Just two games later, a monstrous backhand return from the Russian forced an error from Stosur, giving Petrova the break and a chance to serve for the match. But it was Stosur’s forehand coming to the rescue again, with the Aussie belting an inside-out winner to break back and level the set at 5-5.

Stosur would go on to claim a tense second set tiebreak and force a third set, much to the delight of the growing crowd on Stadium 1.

“Even though I was a set and 3-1 down I got myself back into it which was the most pleasing thing about the match,” Stosur said.

“I don’t think I hit the ball particularly well but at least I was mentally good on myself and fought really hard. So there are some positives and negatives.”

In the third set, Stosur gained the chance to serve for the match in the 12th game but couldn’t complete the task, and when the set progressed to another tiebreak, this time it was Petrova who came out on top.

She snared a vital mini-break with a crisp forehand volley winner to move ahead 4-2, and completed the win after a tense rally on match point that ended when Stosur sent a crosscourt forehand wide.

“I think I was very up and down,” the world No.6 reflected.

“It’s almost comforting to know that I was able to get myself back into a winning position as I was very far from that – there’s always a positive to come out if you can get yourself into that position.

“If you are in that position obviously you want to be able to follow it through and win the match but obviously today it wasn’t meant to be.”

Petrova will go on to face compatriot Maria Kirilenko in the fourth round, who came through an equally-tense three-set battle against Spaniard Lourdes Dominguez Lino.