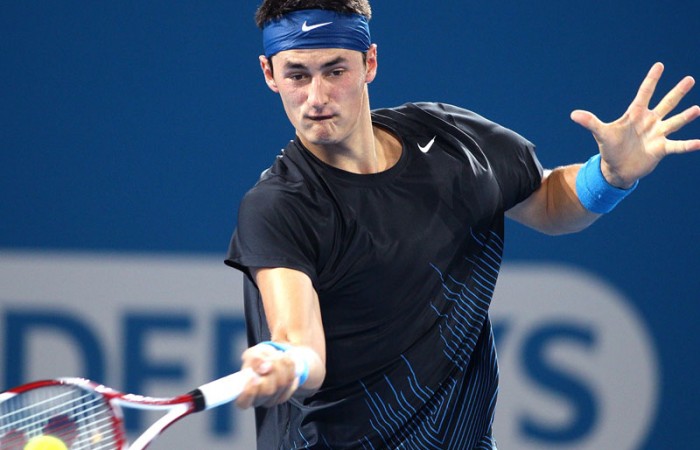 A bigger, stronger and immensely better Bernard Tomic enjoyed his quickest-ever ATP victory on Wednesday night before confidently eyeing a career-best result at the Brisbane International.

The world No.42, who had failed in all three previous tournaments in Brisbane, looked like the seeded player he now is from the start of the second-round clash as he blew an off-colour Ito off the court.

The bulked-up 19-year-old will now face Uzbek Denis Istomin, who has yet to complete a match due to his two opponents retiring or withdrawing, for his first ever semi-final appearance and is confident of continuing his run.

“I was happy with the way I played and (wish) tennis was this easy always,” he said before rating himself a “225 times better” player than 12 months ago.

“It’s a good feeling that you’re not a young kid anymore and people are overpowering you.

“I’m strong and I can compete out there so it’s fun to go out there and get quick wins like this.”

Now weighing 92kg, Tomic was gift-wrapped an array of early points and broke the world No.122 twice to race to a 5-0 lead in 14 minutes.

The Gold Coaster’s serve was a weapon, banging down 10 aces, including three in the seventh game to claim the first set.

While ruthlessly keeping his foot on Ito’s throat in the second set, Tomic’s only disappointment was not converting two match points for a 6-1 6-0 thumping.

Tomic went into the match as the last remaining Australian after top seed Sam Stosur was knocked out of the women’s draw, and fellow teenager James Duckworth lost his second-round encounter.

Wildcard Duckworth was outclassed by French second seed Gilles Simon 6-3 7-5 but impressed with his tenacity to take the match up to the world No.12.

Sixth-seeded Czech Radek Stepanek continued his Brisbane love affair by also making it through to the quarters with a 7-6 (7-3) 6-2 win over Finnish veteran Jarkko Nieminen.

Stepanek, who now has a 14-2 win-loss record in four visits to Brisbane, will meet third seed Alexandr Dolgopolov in the quarter-finals after the Ukrainian produced a nail-biting comeback win over Russian Igor Andreev.