Tennis season may be winding down around the world, but it’s heating up in Melbourne Park where the air is already thick with anticipation over the Australian Open. 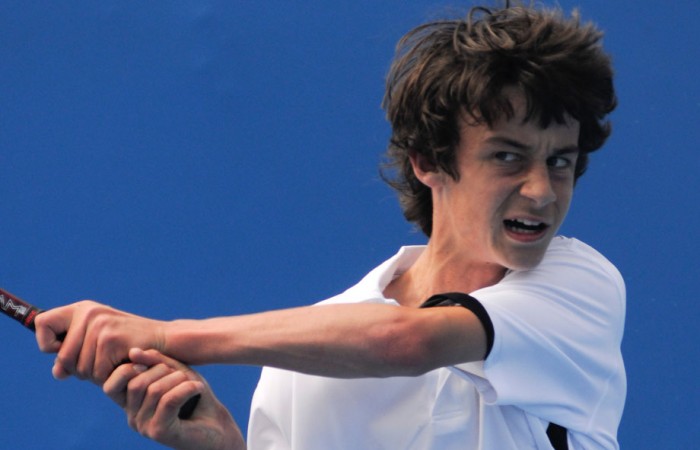 Tennis season may be winding down around the world, but it’s heating up in Melbourne Park where the air is already thick with anticipation over the Australian Open.

Courts are hard to come by due to resurfacing, broken drinking fountains have been fixed, there’s new advertising up, and stands are slowly being erected.

These few months before the Australian Open are spent preparing for the brief two weeks in which professional tennis players grace the courts. It’s a hell of a lot of hard work for such a short time, but by the time January rolls round, you’re practically gagging for it.

I’m not at Melbourne Park to see professional tennis today, although at one stage Marinko Matosevic strolls past me. I’m here for the Optus 14s Australian Teams Championships, which pits state against state in a boys’ and girls’ competition. Every state of Australia is represented here, and so is one entire country – New Zealand, of course, which is too small to be split.

I’ve always found watching young people play serious tennis inspirational. I love watching their mannerisms – did that Queensland boy just pull at his shirt like Andy Roddick? – and their emotion. They’re raw, at this stage in their tennis years, and they play that way. Far too many of them are overly aggressive; you see many balls land in the top of the net and hear the accompanied cries of frustration.

Two boys playing behind me exemplify this, each possesses a nice technique but neither is willing to wait for a mistake. The bigger of the boys finally erupts with a “come on”. It shakes the smaller one, and he’s soon emitting his own yells. His catch phrase is “unbelievable”, and I hear it echoing across the courts many times. It has an originality to it, a word you can imagine him being famous for one day. I like it.

There’s a rather loud growl coming from court eight. I follow the noise and come across two boys who look far beyond their 14 years. They’re playing a furiously competitive, hard-hitting match in which the loud boy seems to be coming off on top. He roars when he hits the ball, and like the small kid’s “unbelievable”, it’s something I haven’t heard before. He even emits a Kvitova-like yelp when he wins a point. I’m rooting for the other boy, though. He’s handling his loud opponent with dignity.

There’s much to ponder over when watching a new generation of players. As a boy comes to net to put away a skilful volley, I’m reminded that net play isn’t dead, it’s merely taken a back seat to the heavy topspin baseline rallies I’m seeing everywhere. Same goes with the one-handed backhand; it’s still there, fighting hard as a minority but impressive to watch when you see one that works.

The young girls play like miniature versions of the professionals. They lean hard into their strong backhand but miss easy volleys. I’m also reminded of the fearlessness of youth. Gael Monfils antics are the norm as kids skid over the court, racquets toppling, lanky limbs falling to the ground. A kid hobbles past with an ice-pack strapped to his knee. It’s no wonder.

I’ve come here to watch one boy in particular who hails from my hometown in New Zealand. It’s a town of 40,000 people with an ageing population and dodgy reputation. It has nice tennis courts, though, and my brother has watched the rise and rise of Kyle Butters. He’s playing as number one for New Zealand and he’s won all his matches so far.

I spot him through his mop of hair playing doubles against Tasmania. He doesn’t stand out in the warm-up. He possesses a nice backhand and forehand, but so does everyone else. It isn’t until he lines up to serve you can see the big difference. While the others have struggled through close service games, Kyle powers through his. His height allows him to send down ace after ace, the Tasmanian kids can’t even block it back.

He wins his first service game to love, and fails to control a smile. It’s the only on-court smile I’ll see during my time there. Amongst the yelling, the racquet tossing, and the looks of despair, Kyle emits a pleasant calm. He’s shy after his match and it is endearing. He’s one of few I see who looks completely focused.

Fourteen is an awkward age. It’s an age where you begin to lose your innocence, when your friends take over from your parents as the top priority in your life, and the opposite sex starts to look inviting.

Most of these kids won’t make it to the professional ranks. Some will find booze and girls and chuck in the racquet for nights out with friends. They might pick it up again in their 20s and wonder what could have been. Some of them will find that coveted growth spurt never comes, and despite giving it their all, won’t quite get there. But I think some of them will.

I saw the future of Australian and New Zealand tennis today and it looked bright.

You can read more of Kait O’Callahan’s blogs at www.anygivensurface.wordpress.com