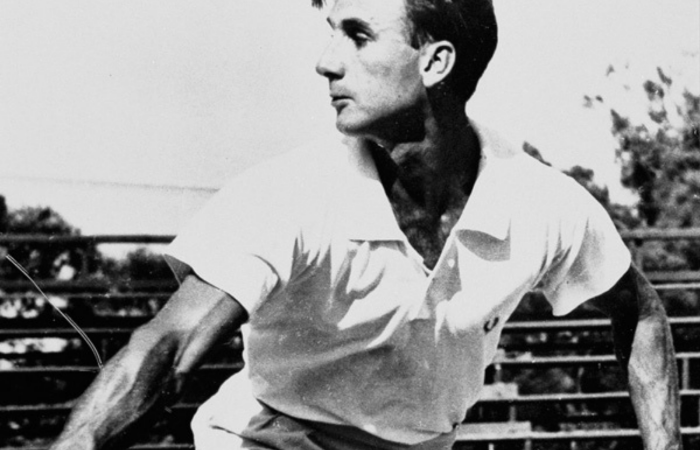 Tennis began for Wilderspin whilst at Wesley College with influence from renowned coach, Herbert Edwards who also played coach to WA’s Arthur Marshall and Bruce Robinson. Wilderspin’s most notable achievements included impressing tennis legend, Harry Hopman after finishing fourth in the Linton Cup aged 16, 9 wins in the state Men’s and Mixed Doubles from 1950 to 1961, finalist achievements in Australian Championships in Double and Men’s Singles events.

Internationally in 1953, he was a runner up in the French Championships with Mervyn Rose in Men’s Doubles, the Dutch National Championships Men’s Doubles winner with Lew Hoad and travelled with the Australian touring team to compete in all four Grand Slam tournaments. Ranked as WA’s No. 1 Men’s Singles player for an impressive thirteen years running (1946 – 1959), Wilderspin took a two-year hiatus before regaining WA’s leading title from 1961 – 1963.

Praised for his longstanding sportsmanship, determination and athleticism, Wilderspin continued to play throughout his senior years, continuing to win competitions and receive notable awards both on and off the court.

Serving as the Tennis West Vice President for a number of years, Wilderspin was recognised as a Life Member of both Tennis West and Tennis Seniors WA. Further recognition of Wilderspin’s legacy is observed with the naming of courts in his honour at Royal Kings Park Tennis Club (2008) and Reabold Tennis Club (2010).

On hearing of Clive Wilderspin’s passing, Tennis West CEO, Brett Patten commented “We are deeply saddened to hear the news of the passing of Western Australian Tennis legend, Clive Wilderspin. Tennis has lost a gentlemen and one of its true legends,”

“Many of Clive contemporaries believe that, at his best, Clive was one of the greatest Australian players ever to play the game.”

“Tennis West send condolences to daughter Dale, sons Craig and Dane and extended family. The sport of tennis in Western Australia has lost a great figure, but we will ensure his legacy and contributions to our sport remain part of the WA tennis fabric for years to come”.

Noting a lifetime contribution to the history of Tennis which spans some 76 years, Tennis West acknowledges the extraordinary life of Mr Clive Wilderspin, OBE.