Before Emma Raducanu, there was WA’s Christine Dorey 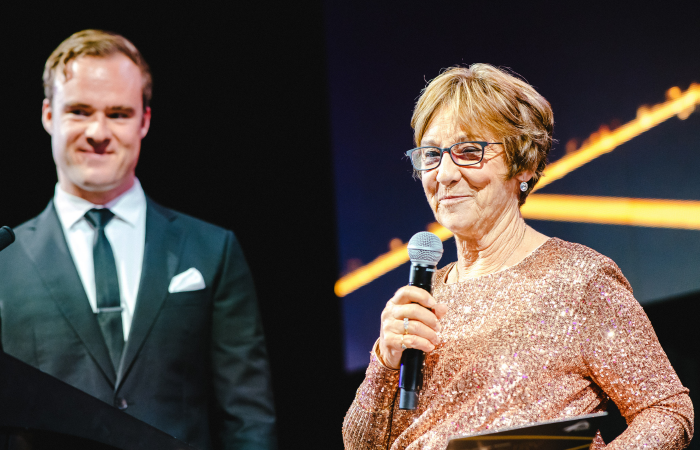 Dutifully noted for being the first woman in the history of the sport to win through qualifying and then advance to the semi-finals of a Grand Slam competition, WA’s Christine Dorey was inducted into the Tennis West Hall of Champions at the 2021 WA Tennis Industry Awards Night at Optus Stadium on Friday night.

With Dorey’s longstanding record upheld for more than 40 years, the impressive achievement was set in 1979 when Dorey played qualifying through to semi-finals of the Women’s Singles Australian Open main draw. The remarkable record was untouched until only recently when rising tennis star, Emma Raducanu, toppled Dorey’s record by claiming the 2021 US Open women’s title. Despite Dorey’s record being surpassed, she remains etched into the sport’s history books as the first woman to ever advance through qualifying and into a semi-final of a Grand Slam event.

Thrilled by the induction into the Tennis West Hall of Champions, Dorey says she was humbled by the award.

‘I feel very humbled, and it is an honour and privilege to me as this is the biggest honour I will ever receive. For something I loved doing so much, tennis gave me the opportunity to travel all over the world especially playing in all the Grand Slams. To grow, mature and develop life skills as well as lifelong friendships along the way,”

‘Thank you to Tennis West and the Hall of Champions nomination committee for this honour and to all the staff and volunteers over the years who have worked so hard for tennis in this State,’ Dorey said.

Etched into the Tennis West history books alongside the 2019 inaugural inductees Elizabeth Smylie, Lesley Hunt, Clive Wilderspin and Ernest Parker (Dec. 1918), the former players were inaugurated for their stellar achievements, distinguished careers and outstanding contributions to the past, present and future position of tennis in Western Australia.

“Tennis in Western Australia holds a far-reaching and robust history and so it’s an absolute privilege to be recognising the achievements of our WA’s tennis legends with the Tennis West Hall of Champions,’

‘Doing so ensures that the efforts, sacrifices and achievements of these incredible champions are etched into the history books for future generations to be inspired and encouraged by,’ Brand said.

Tennis West CEO Brett Patten says the Tennis West Hall of Champions was a wonderful way to recognise and acknowledge the wonderful contribution made to tennis made by the sports former champions.

“WA is fortunate to lay claim to some of the country’s former giants of the sport,”

“Many of whom carved out distinguished playing careers which saw them dominate the tennis scene on both a national and international level,”

“As the state’s governing body, Tennis West is honoured to celebrate the achievements of our great players whilst preserving the rich heritage of tennis in WA,”

“The Tennis West Hall of Champions provides the opportunity to realise and to honour our great legends of the sport, in addition to serving as great inspiration for generations to come,” Patten said.

With a career-high WTA Singles ranking of world No. 89 and WTA Doubles ranking of 39, Christine has been a member of the Fremantle Lawn Tennis Club since 1961. Playing all the major Grand Slam events, competing at Wimbledon on five occasions, Christine was a Quarter Finalist at the 1975 and 1976 Australian Open. Recording her best Grand Slam singles result at the 1979 Australian Open, Christine was the first woman ever to play three rounds of Qualifying and then go on to reach the Semi Finals of a Grand Slam event. Ranked as the state’s No. 1 player in 1970, 1972, 1979, 1980, 1981 and 1985, Christine toured internationally from 1973 to 1977. With an equally impressive Doubles career, Christine enjoyed a run to the round of 16 at Wimbledon (1977) and a semi finals appearance at the 1978 and 1979 Australian Open. Christine was inducted into the City of Fremantle Sporting Wall of Fame (2000) and presented with the Australian Sports Medal (2000). In 2004, Christine was an inaugural inductee into the City of Cockburn Sports Hall of Fame.

With a career-best WTA Singles ranking of world No. 45 and career- best WTA Doubles ranking of world No. 27, Jenny represented Australia at the 1992 Barcelona Olympics and was a team member of the 1987, 1989, 1990 and 1992 Federation Cup teams. Competing on the world stage, Jenny was a Singles Finalist at the 1989 Indian Wells event and the 1992 Birmingham event. A fierce competitor at all of the major slams, Jenny’s best Grand Slam Singles results includes third round performances at Wimbledon (1985), Roland Garros (1986 and 1988), the US Open (1993) and the Australian Open (1992). A talented doubles player, Jenny was a French Open Doubles Quarter Finalist (1986) and Semi Finalist (1987), with Quarter Finals appearances at Wimbledon (1986) and the US Open (1988). Jenny’s best Mixed Doubles performance was to reach the Final at the 1989 Wimbledon Championships. She was also a Mixed Doubles Quarter Finalist at the US Open in 1987 and 1988. Jenny received the WTA Award as the Comeback Player of the Year in 1992.

the Interstate Challenge Cup in 1979 and 1982, claimed eight A Grade (State Grade) premierships with four clubs and was undefeated playing at No. 1 in A Grade in three successive years from 1981.

With Grand Slam appearances at Wimbledon, Roland Garros and the Australian Open from 1980 through to 1983, Chris enjoyed his best Grand Slam performance in 1982 when he made the third round of the Wimbledon Men’s Singles and Doubles events alongside an impressive run to the semi finals of the Mixed Doubles event. Playing on the ATP tour from 1978 through to 1985, Chris reached a career-high ATP singles ranking of world No. 70, winning two ATP singles titles, the Queensland Open (1981) and the Essen Germany (1981), as well as six ATP doubles titles in Queensland, Essen, South Australia, the United Kingdom, Belgium and Perth. During his International career, Chris claimed the scalps of players such as Roscoe Tanner (ATP No. 4) and Victor Pecci (ATP No. 9).

For a full list of the award winners and finalists of the 2021 WA Tennis Industry Awards Night, please see here.