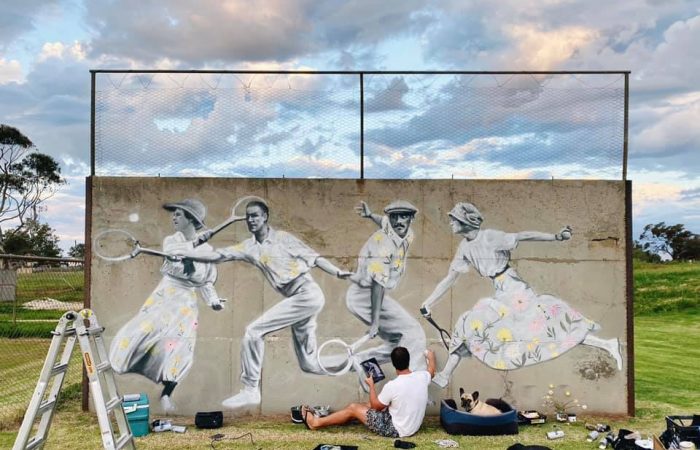 Selected as one of just nine hitting wall projects across the country, the Mid West club was included in the national project in support of the clubs bid to rebuild from the devastating impacts of Cyclone Seroja; which destroyed the club’s two equipment sheds and left the clubhouse condemned for use.

In consultation with the club and local historians, the mural design developed to showcase the towns strong historical ties to tennis whilst also paying homage to the regions spectacular wildflower display which attracts thousands of tourists to the area each year.

With his incredible art work making statements across Western Australia, Jacob ‘Shakey’ Butler says he’s thrilled to have been involved in creating something special for the tennis club and wider community of Mingenew.

“Given the impacts of the cyclone, it’s wonderful to see art and sport coexist in bringing a sense of hope as the club and wider community embark on rebuilding for the future,”

“The mural aims to re-create tennis action sequences which were inspired by the historical portraits supplied by the Mingenew museum,”

“Wildflowers are synonymous with Mingenew and have been shown in colour on the player’s clothes,”

“The flowers appear to have been embroidered on the clothing which is an old tradition that links to the past and works well to make the mural pop,”

“Whilst the mural appears quite simple, it’s the simplicity and beauty of the design that draws you in,” Butler said.

Mingenew Tennis Club Vice President, Hellene McTaggart, says the club are thrilled to have been included in the national hitting wall project.

“The hitting wall mural is a real gift for our community and club and we couldn’t be happier with Shakey’s design,”

“Our club is in a bit of a sad state at the moment, we had quite a lot of damage to our infrastructure as a result of the cyclone both equipment sheds were destroyed and our clubroom building is now condemned,”

“The club is fortunate to be buoyed by our strong positive club culture which means we have a real powerhouse of energy behind getting the club back up and running,”

“We’re working closely with the Shire of Mingenew on the planning and funding requirements for the development of a new permanent clubroom building, whilst also making temporary arrangements for a micro clubroom and storage facility for the upcoming season,”

“The hitting wall mural signifies the beginning of the clubs redevelopment and will bring a new lease of life to club which has been in quite a sad state since the cyclone hit in April,”

“It’s such an exciting project and we can’t wait to see our members, the wider community and visitors to the area enjoying the mural and out there using the hitting wall,” McTaggart said.

“We’re thrilled to see Mingenew Tennis Club supported in its recovery from the devastating impacts of Cyclone Seroja,”

“Reported in the 2018 Mayo Health Clinic study* the health and well-being benefits of playing tennis and being connected with club communities are far reaching, so we appreciate just how important it is for the club to get back on its feet,”

“Tennis has hit record participation milestones over the past 12 months, and this is another great way to further galvanise potential players of all ages to pick up a racquet and have a hit. It’s also worth reflecting on the journey of so many of our tennis greats, most of whom spent hours honing their craft against one of their fiercest opponents – the hitting wall,”

“With countless hitting walls at affiliated venues and clubs, and many more in community parks and public settings, hitting against a wall is a great way for people of all ages to have fun, stay active and improve skills,” Patten said.

The Hitting Wall Project, launched in collaboration with Tennis Australia, will see hitting walls revamped across the country as part of an initiative designed to increase community participation in tennis off the back of soaring participation in 2020/21.

To find out more about Jacob “Shakey’ Butler head to: https://www.shakey.com.au/home