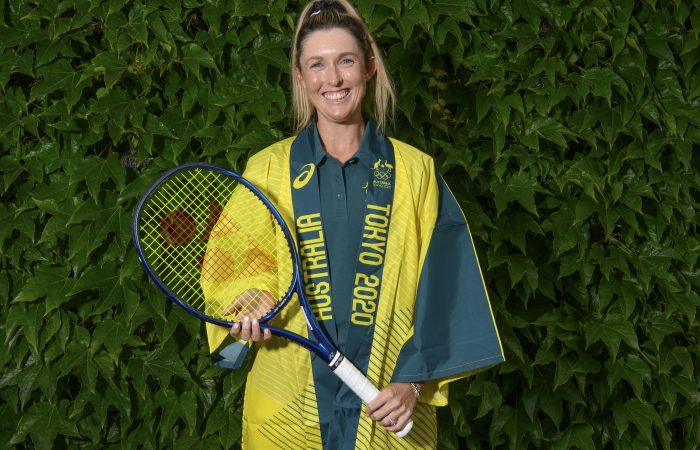 Set to represent Australia in what will be her maiden games, Sanders will hit the courts with Wimbledon Champion and world No. 1 Ash Barty as the pair aim for Olympic gold in the women’s doubles tennis event.

Currently boasting career best rankings in both doubles and singles, Sanders is ranked respectively as the world No. 41 and No.134 player on the women’s circuit.

Excited to have been selected as part of the Olympic team for Tokyo, the left-handed player who began playing on the courts of the Rockingham Tennis Club whilst attending Star of the Sea Catholic Primary School, says being an Olympian is something she’s always dreamt of.

‘Since I was I little girl I’ve had the dream of being an Olympian and representing the green and gold,’

‘Even before I had the dream of playing tennis, it was to represent Australia at the Olympics so it’s a really special moment and I’m super excited to be heading to Tokyo to play in the doubles with Ash who’s the best tennis player in the world right now,’

‘I was super pumped when Alicia Molik called to say I’d been selected and I’m just over the moon and feel incredibly privileged to be representing Australia in Tokyo,’

‘Growing up I always dreamt of competing at the Olympics and I just can’t wipe the smile off my face,” Sanders said.

‘As the governing body of tennis in WA, the whole team are incredibly proud of all that Storm has achieved throughout her career,’

‘From her days as a talented junior player, Storm has always been an impeccable role model and exemplary athlete, who we are honoured to call one of our own,’

‘She’s been grounded by the core values of Compete. Commit. Respect which underpin the National Academy operating out of the State Tennis Centre at Burswood and is a true testament to what’s possible through hard work, dedication and commitment,’

‘From everyone at Tennis West, we wish Storm the very best of luck alongside Ash Barty in the doubles event in Tokyo and we look forward to celebrating this momentous occasion on Friday with the students from Storm’s former primary school at Star of the Sea.’ Patten said.

Sanders Olympic debut will be celebrated on Friday 23 July at Star of the Sea Primary Catholic Primary School with a special whole school assembly and special presentation by Tennis West.

Identified as a talented junior player, Sanders trained with the National Academy Team at the State Tennis Centre (Burswood) before turning professional in 2009.

Find out more about the impressive career of Storm Sander here.