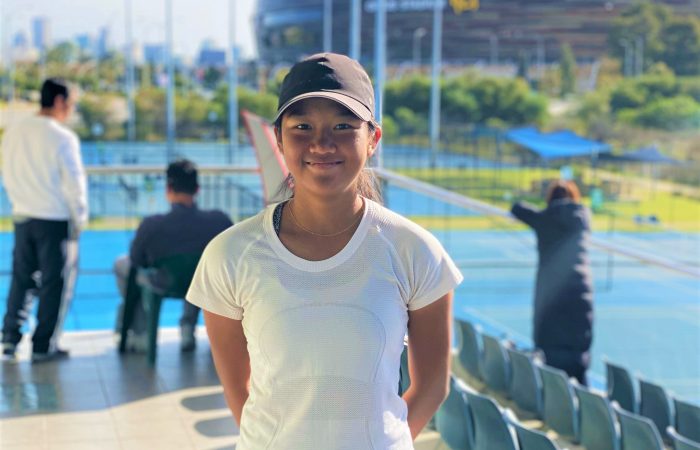 Young guns James Newton and Gayle Leong were victorious over the weekend, both laying claim to maiden AMT Singles titles in their respective Men’s and Women’s events at the 2021 WA Day Bronze AMT and Junior Silver JT event.

Played at the State Tennis Centre and Mount Lawley Tennis Club, more than 200 local and interstate players were in action across the tournaments 20 event program which included both boys’ and girls’ events in 12/u, 14/u and 16/u singles and doubles draws, in addition to the AMT Men’s and Women’s events.

Placed as the number three seed,  Newton, aged just 16, was flawless throughout the Men’s singles draw defeating number one seed Jerome Iaconi 6-7 (5), 6-2, 10-3 in the semifinal before claiming victory over the number two seed, Michael Faulkner, with a convincing 6-2, 6-3 win to claim his first semi-professional title. Following his impressive singles win, Newton then went on to contest the Men’s Doubles final with playing partner Mathew Burton. The pair overcame top seeds, Jerome Iaconi and Adityavikram Mann, in a tough three set 5-7, 6-3, 10-7 contest.

Fellow sixteen year old and number three seed, Leong, who didn’t drop a set throughout the four day tournament, fought back from a set down to eventually beat top seed, Skye Royall, in a tough 4-6, 6-1, 10-6 tie break decider. A finalist in the Women’s Doubles event with playing partner Alfee Stevens, the pair were overcome by top seeds Caitlin Hindmarsh and Lauren Nikoloski who were victorious with a 6-1, 6-0 win.

Tournament Director and Tennis West Manager of Competitions and Tournaments, Loretta Hughes says the four-day event was a great success and a great lead in to a host of upcoming tournaments set for the July school holidays.

‘The success of the weekends AMT Bronze and JT silver events proves a very healthy appetite for tennis tournaments in WA,’

‘With more than 200 local and interstate players hitting the courts of the State Tennis Centre and Mount Lawley Tennis Club, it was pleasing to see such a high standard of play right across the weekend,’

‘Both James and Gayle must be congratulated on their stellar performances. Claiming their first semi-professionals titles at just 16 is a wonderful achievement and something they can be very proud of,’

‘The tournaments pathway includes Junior Development, Junior Tournaments and Australian Money Tournament and supports the development of players who wish to continue along the competitive playing pathway,’

‘And there’s plenty more on offer in WA with the upcoming July swing of tournaments offering bronze, silver and gold junior JT events across the two week July school holidays,’

‘Registrations are open for all events and we look forward to seeing everyone out on court throughout July,’ Hughes said.

Boasting as the largest tennis competition in WA since the disruption caused by the COVID-19 pandemic at the beginning of 2020, the 2021 WA Day Bronze AMT & Junior Silver JT & 10s event attracted both local and interstate players who travelled from South Australia and Queensland.

For all information regarding upcoming WA tournaments, please follow here.

Australian Money Tournaments (AMT) are semi-professional tournaments that offer both prize money and Australian Ranking points. They are designed to create quality match play opportunities and help with the transition for post junior athletes and act as a stepping stone towards the Australian Pro Tour.