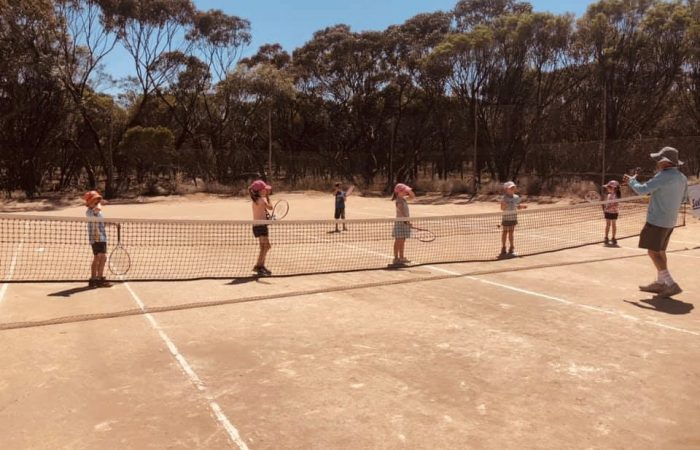 Ensuring the Toolibin Tennis Club remains as a thriving centrepiece to the town’s remote and isolated community, members of the club have been coming together for more than 90 years to ensure the up keep of the club’s historic and original clay courts.

Situated in the Upper Great Southern region of Western Australia, the remote and isolated club was established in 1924 and boasted 46 inaugural members. Initially home to just two clay courts made from locally sourced white gum clay, the courts were originally constructed with pick, shovel, and horses for dray work. As demand and membership numbers grew, the addition of a further two courts in both 1934 and 1953 saw the clubs clay court count swell to six. The club today continues to service all six courts with locally sourced clay and the use of traditional rollers.

Fast forward to 2021 and tennis remains at the very heartbeat of the community, standing remarkably steadfast as the only building and facility remaining in the Toolibin town site. With the thriving clubs membership base made up from neighbouring farming families, there is always plenty of support and enthusiasm for the club’s busy playing and social calendar.

Proclaiming to exist as the oldest active clay court tennis club in all of rural Australia, Club President and local farmer Kyle Angwin, says the club is buttressed by a truly unique history which dates back to the early 1920s. Steeped in an undeniable richness of community spirit and collective commitment, the club’s resurgence over the last few years has meant that Toolibin Tennis Club continues to exist as a thriving tennis community with something for everyone.

‘Whilst we’ve never been able to confirm or deny our claim to being rural Australia’s oldest active clay court tennis club, there’s no refuting that we exist as one of Australia’s most quintessential rural tennis clubs which unites the community for a common cause,’

‘Without the commitment and dedication of our rural community, the club simply wouldn’t exist. The upkeep of the courts brings the whole community together and it’s been happening for more than nine decades and that’s something pretty special,’

‘From the watering, rolling out and marking of the courts, to putting up nets, coordinating coaching and pennants teams and then making sure there’s plenty of social tennis and social activities; many hands make light work in delivering tennis to our community,’

‘Over the last couple of years we’ve seen a real resurgence at the club which has the whole community coming together to keep tennis happening in the area,’

‘Thanks to grants made possible through Heathway and SunSmart, our junior players are really well catered for with junior tennis development days and coaching delivered by zone coach, Keith Obrien, who visits the club to work with our next crop of super stars,’

‘Pennants and social tennis aside, we host club championship events and the hotly contested King and Queen of Clay and enjoy travelling to neighbouring clubs for a host of competitions and events across the region,’

‘This year we finished the Dumbleyung-Toolibin Tennis Association summer competition as semi-finalist. Everyone was thrilled with the result, which was an improvement from previous years and exciting for everyone involved,’

‘Tennis really seems to bring the whole community together and the vibe at the club is really fantastic. From one week old babies to 73 year olds, it’s wonderful to see so many locals enjoying the atmosphere of clay court tennis and our thriving little club,’ Angwin said.

The Toolibin Tennis Club is located at Old Line Rd, Toolibin in the Shire of Wickepin.The club meets from October through to April. To find out more head to the club’s Facebook page or contact the club President, Kyle Angwin at [email protected].