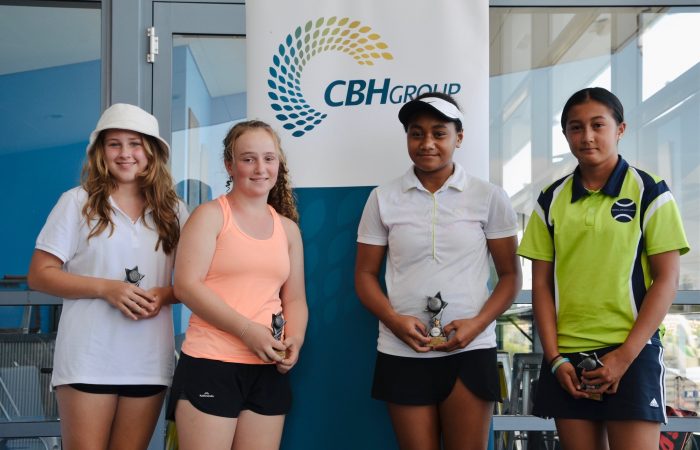 More than 80 country tennis players from across the states regions descended on the courts of the State Tennis Centre (Burswood) during January, for what was the long awaited 2020-21 CBH Country Tennis Championships.

Put on hold since March 2020, the Championships saw an impressive 81 players from seven regional zones contest 128 matches across the three-day competition which ran from Monday 18 January.

Players from the South West, Peel Upper Great Southern, Great Southern, South Coast Mid West and Central Districts zones competed in singles and doubles competitions, with players vying for titles in male and female events from 10/u through to Open competitions.

“The CBH Country Tennis Championships is a significant event which our country players look forward to each year,”

“It was wonderful to finally host the 2020 event which was played with great sportsmanlike behaviour and some friendly banter between the opposing zones.”

“And the team looks forward to doing it all in again in April with the 2021 CBH Country Tennis Championships set to be held at Alexander Park Tennis Club.” Tournament Director and Tennis West Leagues Operations Lead, Deanne Maloney said.

Established in 2013, the event is a combination of the historic Country Week Singles and Teams fixtures which began as a WA Lawn Tennis Association (WALTA) event in 1923, and the Country Zone Challenge which began in 1997.

*Entries open to both male and female competitors

Congratulations to all participants, winners and runners up on a successful event.

As an Australian Ranking (AR) tournament, all junior players are eligible to compete for Australian ranking points in both Singles and Doubles, providing the opportunity to be ranked against players from right across Australia. For more information, head to https://www.tennis.com.au/wa/tournaments

For more information on the 2021 CBH Country Tennis Championships, please head to: https://tournaments.tennis.com.au/