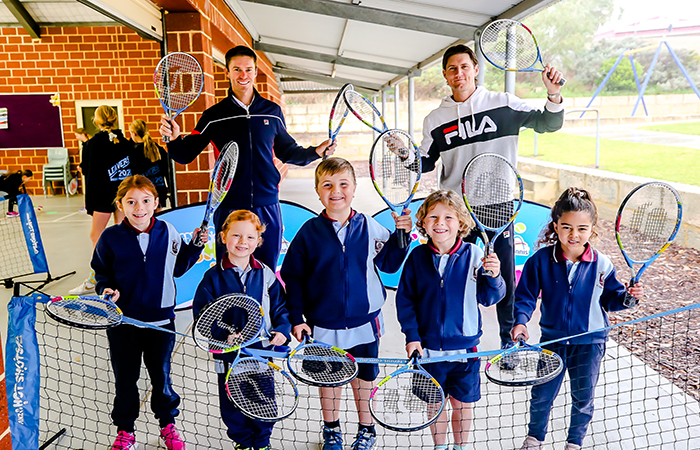 “Giving back to grassroots tennis aligns with so much of what I’m trying to do, and being involved in this year Racquet Roadshow is a great opportunity to inspire the next generation of players to pick up a racquet and have a go,” said Australian Open 2013 Mixed Doubles Champion, Matt Ebden.

‘We’re usually away on tour and unable to be involved in these great initiatives. Being home through COVID-19 has gifted us the opportunity to give back to where it all began for us,’ said Australian Open 2017 Doubles Champion and Davis Cup Team Member, John Peers.

Ebden and Peers inspired the Duncraig students with highlights of their impressive tennis careers, which between them includes a host of ATP titles, two Australian Open Grand Slam titles and Olympic Games, Commonwealth Games and Australian Davis Cup Team appearances.

The pair then answered questions from the crowd of aspiring young tennis players, before handing out racquets and concluding the visit with a short tennis clinic for the students.

By December, 170,000 racquets will have been delivered to schools across Australia since 2015, thanks to ANZ. And with published reports continuing to discuss declining levels of activity in children, the free racquets will help get kids moving at school, home and in the community.

“Our partnership with ANZ will give another 3,000 kids across WA the opportunity to get active and lead a healthy lifestyle,” commented Tennis West CEO Michael Roberts.

“Tennis Australia’s partnership with ANZ has helped us to put more racquets in children’s hands than ever before. There are so many skills that kids can develop at a young age by playing tennis, regardless of whether that’s on the court, in their backyard or even in their lounge room,” Mr Roberts said.

“We’re really proud of our continued support of tennis at a grassroots level, encouraging Australians to get active and look after their wellbeing,” said Katherine Bray, Managing Director Retail at ANZ.

“Over the past five years this partnership with Tennis Australia has delivered racquets to thousands of communities across the country, helping young kids to get involved in community sports like tennis” she added.