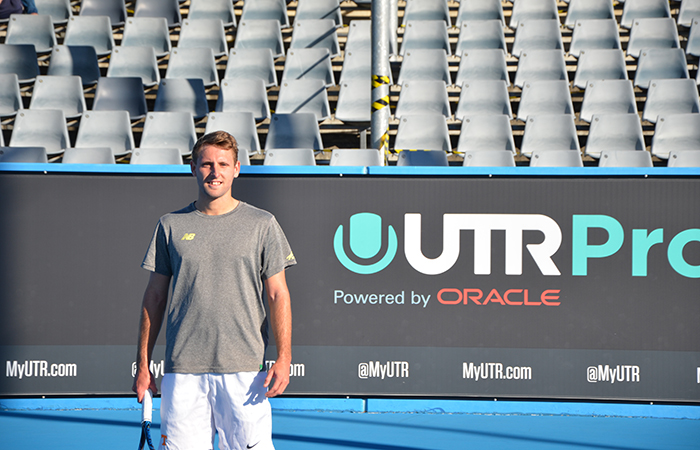 Number one seed and University of Tennessee graduate Scott Jones (Piara Waters) will contest back-to-back titles of the UTR Pro Tennis Series event when play returns to the State Tennis Centre on Friday for the third and final instalment of the Perth based event.

Showing impressive form throughout the series, Jones has won seven of his eight matches. Runner up to Grand Slam Champion John Peers in the first instalment of the series, Jones forged his way through the second event, going undefeated to claim the Final 6-2, 6-3 over fellow US college student, Scott Webster.

Committed to making it an 11:1 win loss ratio for the three-part series, Jones is determined to make it back-to-back titles.

‘The plan is to go back to back, that would make it 11 wins from 12 matches so that’s what I’ll be aiming for,’ Jones said.

The UTR Pro Tennis Series features events in Sydney, Brisbane, Adelaide, Melbourne and Perth, with players entering using their Universal Tennis Rating (UTR). This offers players an opportunity to compete locally and have their results count globally via the UTR system, along with a share in the $450,000 prizemoney.

The UTR Pro Tennis Series provides players with the opportunity to compete for prize money following the months-long suspension of the international tours due to the COVID-19 pandemic, and is a key opportunity for players to return to tournament play. Event organisers have worked closely with government authorities to ensure strict physical distancing protocols are in place, along with additional hygiene and safety precautions.

Order of Play  – the daily order of plays will be made available here: Perth – State Tennis Centre

All matches will be streamed via Tennis Australia’s YouTube channel here.

As the event is being hosted across the country, it is a requirement that all biosecurity, health and safety protocols are consistent. As such, please note the following restrictions:

What is a UTR? Universal Tennis Rating (UTR) is an international tennis rating system that connects millions of tennis players around the world to help them find better matches locally. UTR reflects a player’s current skill level based on head-to-head match scores, and rates all players across age, gender and nationality on the same 16-point scale. Every player can have a UTR – from the pros to juniors to social tennis players.