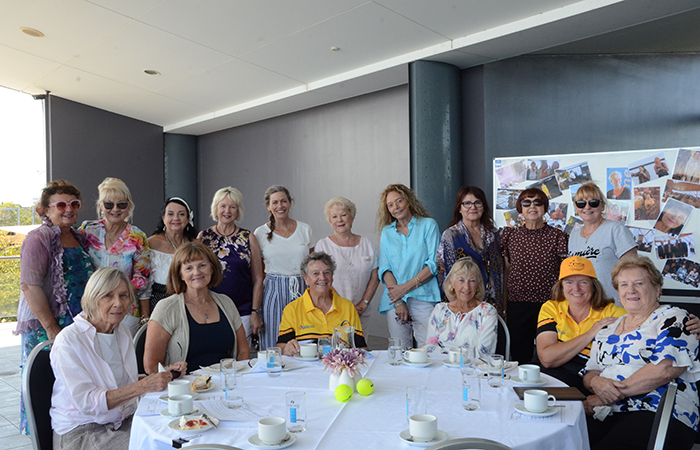 Contributing to the success of WA’s high performance female athletes, longstanding volunteer group Women in Tennis have been raising funds for more than 20 years in support of ongoing playing opportunities for the state’s top placed female tennis players.

And with this year’s May 18-24 National Volunteer Week championed by the theme ‘Changing Communities. Changing Lives’, there’s never been a better time to recognise and celebrate the ongoing efforts of Women in Tennis.

Originating in 1961 as the Women’s Auxiliary, Women in Tennis has been operating as an independent volunteer fundraising group since 1998. Committed to supporting the continued participation of the state’s top placed female talent, the group holds regular gala days, special guest breakfasts, fashion parades and tennis tournaments in a bid to raise funds for the ongoing financial backing of WA’s female players.

A committee member since 1992, Women in Tennis President, Trish Ross has held the position for an impressive 16 years, and is ably supported by a passionate group of volunteers including equally longstanding Secretary, Bobbie Edwards and recently appointed Treasurer, Kerry Edwards whose involvement as a committee member dates back to 2007.

United in their commitment to supporting WA’s aspiring athletes, Ross says the group continues fundraising efforts to remove the burden and financial barriers which might otherwise prevent the young girls from their continued competitive involvement in the sport.

‘The girls regularly travel to the Eastern States to compete in national championships and ITF events,’

‘Whatever it is that we’re able to provide is always greatly appreciated and makes traveling for tournaments and events a little easier,’ Ross said.

Acknowledging the significant contributions provided throughout the early days of her ambitious pursuits to become one of the world’s top ranked players, Astra Sharma whose current WTA rankings stands at world No. 126, says that financial support aside, the group’s support afforded her a real sense of community.

‘It was really nice to feel the support of Women in Tennis. It felt like I had a community behind me who cared about me as a person and as a tennis player and it was really great to feel that backing,’

‘It gave me the confidence and belief that other people were backing me,’ Sharma said.

Fellow West Australian, professional tennis player and world No. 276 Storm Sanders echoes Sharma’s sentiments, claiming that the support of Women in Tennis allowed her to chase her dreams of playing on the professional women’s circuit.

‘I received support from Women in Tennis when I was a junior player, which allowed me to travel and compete at Australian national championships and junior ITF events,’

‘It’s such a crucial time in a players development, so to have the opportunity to compete at high level events helped me improve my tennis and motivated me to become the best player I could be,’

‘It meant a huge deal to my family at the time. Being from Western Australia, flights and accommodation make it very expensive to compete at national championships and ITF events, so to be able to receive financial support from Women in Tennis, it helped my parents stress less about affording the costs and gave me an opportunity to compete in more national competitions,’

‘Looking back, I am very appreciative and grateful for the support I received from Women in Tennis as a junior player,’

‘Now as a professional player who is in charge of my own expenses of my career, I appreciate how expensive it can be to chase your dreams,’

‘So to be able to receive support, no matter how big or small, really means a lot and can help change someone’s career,’ Sanders said.

Benefiting for many years from the support of Doris Brinkhaus of Brinkhaus Jewellers, the group have been gifted countless generous raffle donations from the exclusive jeweller to assist with the group’s continued fundraising efforts. Ross says Brinkhaus is a talented and passionate player in her own right who aligns with the group’s commitment to supporting the achievement of young girl’s dreams.

‘Doris is a brilliant tennis player and absolutely loves the sport hence her desire to support us as we assist so many young girls financially,’

‘We would be truly lost without her generous and ongoing support,’

Noting an increase in demand for support, Ross says that this year alone the group have supported thirteen young WA hopefuls who each have their own dreams of one day following in the footsteps of WA’s leading ladies and Australia’s world No. 1 Ashleigh Barty,

‘We’ve definitely seen a dramatic increase in applications for our support over the past twelve months,’

‘We’ve suddenly jumped from supporting five or six girls to assisting in playing opportunities for up to thirteen,’

‘The increase in demand for support is a little worrying as we have to continue to fundraise in order to keep up with being able to offer our support to the girls,’ Ross said.

Speaking to the vital role that Women in Tennis, both Sanders and Sharma agree that the continuation of the group’s support is incredibly important to ensuring the ongoing development of WA’s next wave of top ranked players.

‘I think it is so important that the support from Women in Tennis continues for the WA junior girls,’

‘To be able to give them an opportunity to compete at national and ITF events which they may have otherwise not been able to get too financially, is so crucial to their development in becoming a professional tennis player,’

‘Some players may not have sponsors so might need to buy racquets, shoes and other equipment, and this can be quite stressful as it all adds up,’

‘The support means they don’t have to stress about these things and can just focus on becoming the best tennis players they can be,’ Sanders said

‘I think that organisations that support girls in sports are vital. It’s an extremely competitive field and not many girls are encouraged to go into it,’

‘Support from the Women in Tennis helps to pave the way for these younger kids,’ Sharma said.

Tennis West CEO Michael Roberts applauded the Women in Tennis group and the countless volunteers, recognising them for the collective dedication to the delivery of tennis and proficient running of clubs across by metropolitan and regional WA.

Facilitated by Volunteering Australia, the 2020 National Volunteers Week will this year be a virtual celebration of Australia’s volunteers. For more information you can head to: https://www.volunteeringaustralia.org/#/

To find out more about Women in Tennis, or to offer your support, please head to https://www.tennis.com.au/wit/