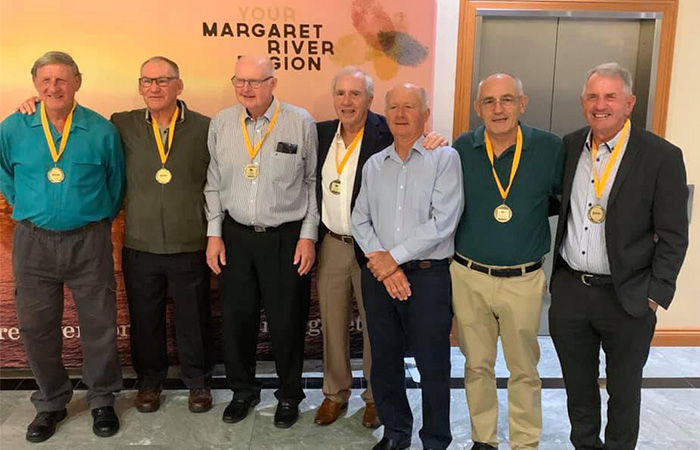 The 2020 Australian National Seniors Championship continues this week at the Busselton Tennis Club, following the staging of the successful Teams Carnival, which wrapped up on Friday.  The Carnival featured 730 players from across the country, as well as international representation from Japan, Malaysia and New Zealand.

For the third year in a row, Queensland claimed the overall Team Carnival Trophy, with WA putting in a dominant performance, winning four divisional titles in the Women’s 50/55 category, Men’s 50/55, Men’s 70 and Men’s 80 Division.

In their first appearance at an Australian Seniors Tournament, the Women’s 50s Team were thrilled to claim their maiden title, with Team Captain Helen Morgan now eager for her team to continue playing future Seniors Tournaments.

“Our team is a group of ladies from Nedlands Tennis Club who play league together, and upon learning the Australian Seniors Championships would be held in Busselton this year, we decided to form an over 50s team”

“We love our tennis and we’re looking forward to playing a number of matches over the week, with our initial aim being to finish higher than 7th or 8th to avoid an early morning match on the final day!”

“Winning was just icing on the cake, and now our team members are keen to play in future competitions” Ms Morgan said.

In the Men’s 80’s Division, it was back-to-back titles for the WA Team of Alan Morcombe (C), Ken Harris, Bill Hawthorn, Don Scott and Cecil Gardiner, who last year claimed the same division at the 2019 staging of the event in Shepparton, Victoria.

Humble in their victory, Captain Alan Morcombe said Seniors Tennis is the real winner this week.

“This win marks two years in a row for our over 80’s team, however the real winner is seniors tennis,”

“The camaraderie and fellowship at these events is the reason we participate, and this year, the courts, the facilities and the hospitality at the new Busselton Tennis Club has been second to none” Mr Morcombe said.

The field for this event has a strong international contingent, with players from 18 different countries, including Canada, USA, France, Switzerland, New Zealand, Germany, Algeria, Poland and Italy represented across the tournament.

The international players will line-up against some of the best Australian seniors tennis talent, including local WA Players Richard Sampson and Cameron Venables, who, in October took out the 2019 ITF Trabart Cup 40+ in Miami, Florida.

Australian Tennis Seniors Championship Tournament Director, Joel Goodwin is pleased not only with the calibre of players taking part in this event, but also the camaraderie and team spirit that has been on display during the week.

“This event is always a popular event on the Seniors Tennis Calendar, and this year is no different”

“We have already witnessed some incredible team tennis that has been highly competitive, yet played in the spirit of fellowship that is synonymous with this tournament”

“This week we are set to witness an incredible standard of tennis, with some of the best local, interstate and international seniors players all vying for their chance to take home the coveted silverware” Mr Goodwin said.

The Australian Tennis Seniors Championship is being held from the 5-17 January and will feature over 1,000 competitors across the team and individual events.