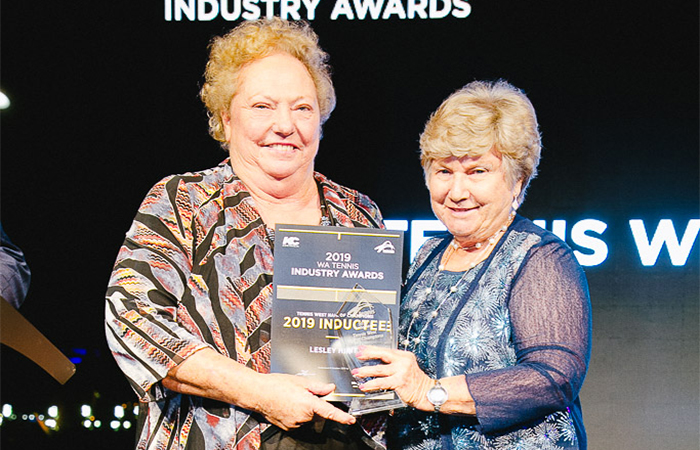 Honouring the legacy of the state’s former tennis stars, the Tennis West Hall of Champions was unveiled at this year’s Tennis Industry Awards Night with the names of four inaugural inductees announced.

Etched into the Tennis West history books was Clive Wilderspin, Elizabeth Smylie (Sayers), Lesley Hunt and Ernest Parker (deceased 1918). The former players were inducted for their stellar achievements, distinguished careers and outstanding contributions to the past, present and future position of tennis in Western Australia.

“It was during my time playing seniors tennis that I realised many players I’d competed against on the professional circuit were inductees of their respective Halls of Fame,”

“I made a commitment to bring that same recognition to the former champions of WA,”

“That was over thirty years ago so the realisation of the Tennis West Hall of Champions is quite significant,” Brand said.

“WA is rich with past, present and future tennis champions so it was important the committee establish a selection criteria reflective of the legacy we intended for the Hall of Champions to bestow,”

“Considerable time was given to the selection criteria in addition to researching worthy recipients for the inaugural induction,”

“We came to realise quite quickly that WA is home to many former greats of the game so the decision was made very early on that inductees needed to have been a product of the WA Sporting System,”

“That criteria was crucial in helping to guide our decision making,” Brand said.

“Both Clive and Lesley were thrilled to receive their induction in front of a 300 strong crowd at the awards night,”

“Clive was a prominent player on the WA tennis scene in addition to his appearance at all four Grand Slam events in 1953,”

“His induction was a fitting acknowledgement to his tennis achievements on both a local and international level, in addition to the legacy that follows his name,”

“Likewise, the induction of Lesley Hunt was a very fitting tribute,”

“Lesley was a trailblazer of her time. She joined a number of prominent female players in changing the position of women’s tennis for the better,”

“Women’s tennis wouldn’t be where it was today without the achievements of players like Lesley,” Brand said.

Tennis West CEO Michael Roberts says the Tennis West Hall of Champions was a significant initiative which would accentuate WA’s position as a powerhouse of past, present and future talent.

“WA is fortunate to lay claim to some of the country’s former giants of the sport,”

“Many of whom carved out distinguished careers which saw them dominate the tennis scene on both a national and international level,”

“As the state’s governing body, Tennis West now has an opportunity to honour and celebrate the achievements of our great players whilst preserving the rich heritage of tennis in WA,”

“The Tennis West Hall of Champions will provide the opportunity to realise and to honour our legends of the sport, in addition to serving as great inspiration for generations to come,” Roberts said.

Clive Wilderspin
Clive was a member of the Australian team that toured internationally and played in all four Grand Slam events in 1953. He was Ranked No. 1 for Men’s Singles in WA 15 times between 1946-1963 and was inducted in the WA Sports Hall of Champions in 1988.

Elizabeth Smylie (Sayers)
Elizabeth has won four Grand Slam Doubles titles in her career, including the 1983 US Open Mixed with John Fitzgerald, Wimbledon Ladies with Kathy Jordan in 1985, US Open Mixed with Todd Woodbridge in 1990 and Wimbledon Mixed with John Fitzgerald in 1991. Elizabeth’s highest World Ranking in Singles was No. 20 and Doubles No. 5. Elizabeth represented Australia in Fed Cup from 1984-1994 and won an Olympic Bronze Medal in the Women’s Doubles with Wendy Turnbull at Seoul in 1988. Elizabeth was Ranked No. 1 in Women’s singles in WA 6 times between 1981-1990

Ernest (Ernie) Parker
Ernie is the only Western Australian to have won an Australasian Men’s Singles title (1913). He was also a finalist in the same event in 1909 (losing to Anthony Wilding – a four time Wimbledon Champion). Ernie also won the Australasian Men’s Doubles in 1909 and 1913.

Ernie won the WA Men’s Singles Title seven times and the Doubles Title eight times between 1903-1913 and was inducted into the WA Sports Hall of Champions in 1992. Ernie served with the AIF in the Artillery in World War I and died on active service in France in 1918

Lesley Hunt
Lesley’s highest World Ranking in the Women’s Singles was No. 7. She was also ranked No. 3 in Australia behind Margaret Court and Evonne Goolagong-Crawley. In recognition of her considerable achievements Lesley was inducted into the WA Sports Hall of Champions in 1993.

Lesley was a semi-finalist in the Australian Open Singles in 1971, and a quarter finalist in the US Open 4 times between 1970-1978. She was also was a regular semi-finalist or quarter-finalist in both singles and doubles in many other Grand Slam events in the 1970’s and was notably a member of the winning Fed Cup Team alongside Margaret Court and Evonne Goolagong-Crawley in Perth in 1971.