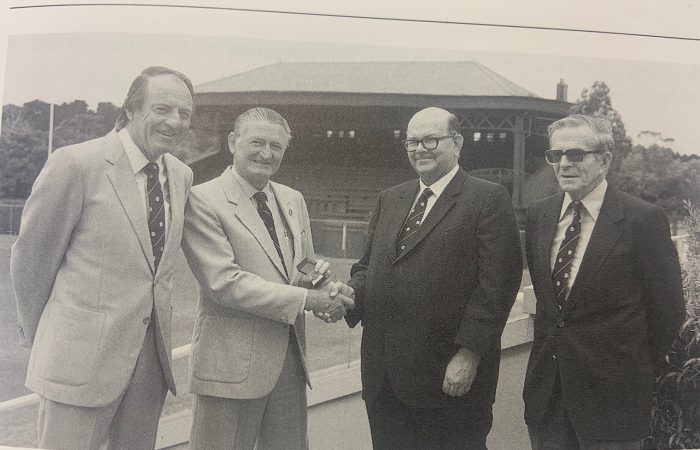 It is with the greatest of sadness, and the upmost respect, that Tennis West writes to inform all clubs on the passing of Tennis West Life Member and Former President of Tennis West—Mr Alan Hicks OAM.

An accomplished tennis player known for his slow paced left hand serve and ability to move to the net, Alan represented himself and his state proudly. A dominant junior from Kalgoorlie, Alan proved his position as one of the state’s top ranked juniors with selection in the 1950 and 1951 Linton Cup teams. Ranked as the No.1 WA junior in 1950, followed by a No.2 ranking in 1951, Alan continued his dominance to become a respected member of the1953/1954 and 1954/1955 Kings Park A grade pennant championship team, a valued player of the winning Country Week teams of 1957 and 1958, in addition to his victory in the1955 Men’s Singles City of Perth Championship title.

Alongside his beloved wife Mary, Alan was instrumental in the administration and delivery of tennis across clubs and zones throughout regional and metropolitan WA. Instrumental in the establishment and affiliation of the Corinthian Park TC, Alan was also involved as the Chairman of the State Selection panel, Chairman of the Finance Committee, founding Chairman of the McDonald’s Junior Tennis Australia, Trustee of the State Players Development trust, and in 1973, was named as an inaugural member of the West Australian Veterans Club.

As a member of the State Tennis Centre working committee, followed by a six year term as the Tennis West President (1990-1996), Alan’s involvement in both State and Federal negotiations were fundamental to the development of today’s existing State Tennis Centre site. Perhaps Alan’s most enduring legacy though, was his dedication to developing junior players across WA in addition to his unwavering determination to facilitate the professional delivery of tennis for all West Australian’s. His commitment in doing so is evident in the success of today’s WA athletes who continually prove their position on both a national and global stage.

As a Life Member of Tennis West, the North Kalgoorlie TC and Corinthian Park TC, Alan was also bestowed an OAM for his service to tennis, and was named the 1996 WA Sport Person of the Year.

On behalf of the tennis community, the Board and staff of Tennis West gratefully acknowledge Alan’s outstanding service and extends their deepest condolences to Mary and the extended Hicks family on the loss of a very special person.