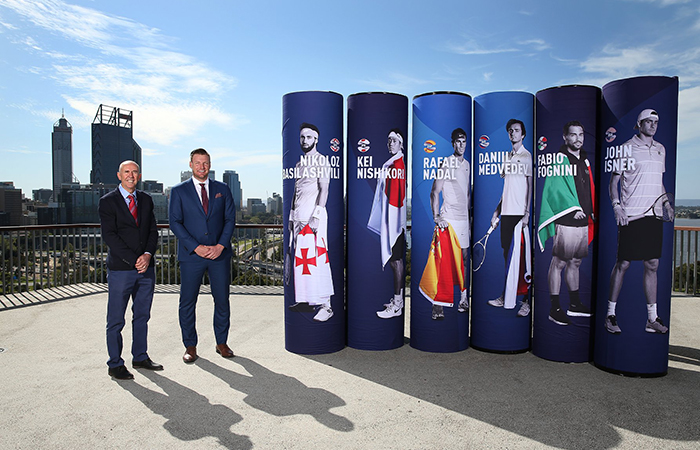 The ATP Cup 2020 Official Draw was conducted under the sails of the iconic Sydney Opera House in New South Wales this week with satellite crosses in Perth and Brisbane.

The draw revealed where the first 19 countries will play in 2020, confirming Perth will host Spain, Russia, Italy, Japan, Georgia and the USA who sit within Groups B and D of the competition.

US Open champion Rafael Nadal will lead Spain in Group B and Russia’s world No.4 Daniil Medvedev sits in Group D.

“All eyes will be on Perth when Rafael Nadal takes the court at RAC Arena,” WA Premier Mark McGowan said.

“The ATP Cup is set to be a stunning success for our State on so many levels.

“Western Australians love their tennis, so we expect this new tournament will have huge appeal for locals as well as visitors.”

Australia as the host wildcard have also been drawn into Group F.

“Novak Djokovic is not only the best male tennis player in the world, but one of the greatest players to ever live. To have him playing in Brisbane will bring thousands of people to Queensland,” Jones said.

Sydney will host Switzerland, led by world No.3 Roger Federer in Group C, and Austria’s world No.5 Dominic Thiem in Group E.

NSW Minister for Tourism Stuart Ayres said Sydney will provide the perfect location for both the group stages and finals of the ATP Cup.

“I am delighted our beautiful Harbour City will play such a key role in this fantastic new initiative, which will attract not only the world’s best tennis players, but visitors from right across the globe,” Ayres said.

“With the upgrades to Ken Rosewall Arena, which include a brand-new canopy roof structure, Sydney is more than ready to showcase both the group and finals stages of this world-class tournament.”

“In all of the conversations we’ve had with the players, right from the beginning, they have said this is their event. They want to play it. They want to make it work,” Tennis Australia CEO Craig Tiley said.

“There’s a lot at stake. There is more than $US15 million in prizemoney and 750 ranking points – that’s up there amongst the highest of all of the events in tennis. But also it’s the launch of the season and they want to test out where they’re at. They’re playing for their country and with their mates. That’s what’s going to be such a special experience for the players and the fans.

Five further countries will qualify, on the second entry deadline of 13 November, for the 24-country ATP Cup based on the ranking of their No.1 singles player.

Eight countries that win through the group stages in the three host cities will then play at the ATP Cup Final Eight in Sydney, which will feature quarterfinals over two days, semifinals and a final.

About the ATP Cup

The ATP Cup is an annual 24-country team competition featuring AUD $22 million prize money and a maximum of 750 singles and 250 doubles ATP Rankings points. The ATP Cup is staged in partnership with Tennis Australia. The ATP Cup will begin the new season and in 2020 will run from 3 to 12 January. The tournament will be played over six days in Brisbane, Perth and Sydney. The eight surviving teams will advance to the finals in Sydney.

Tickets will be on sale for Perth from Ticketek from 4 pm AWST TODAY.