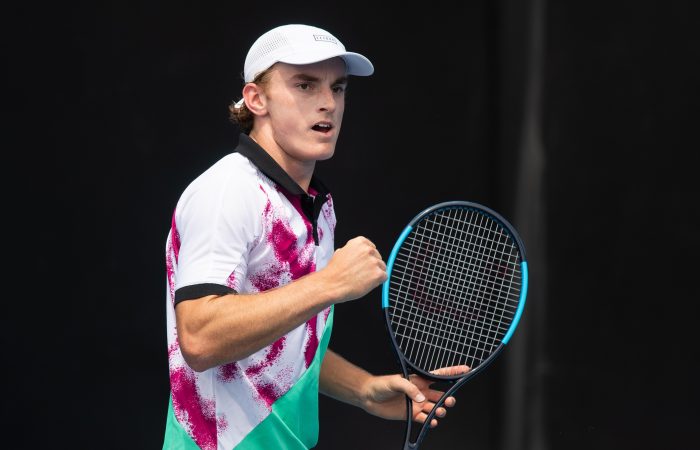 WA’s Tristan Schoolkate will depart Perth next week ahead of his debut appearance at the US Open Junior Tennis Championships commencing on 1 September 2019.

Proving his position as one of Australia’s up and coming talents is Schoolkate’s Junior ITF Ranking of 36 and Australian Ranking (AR) of 39. As one of only four juniors inside the top 50 Australian men, Schoolkate compares well to emerging tennis stars Alex De Minaur and Jordan Thompson who lead the AR charge.

Contributing to Schoolkate’s ITF and AR rankings rise, and acceptance to the US Open Junior’s, is an impressive 2019 performance showcase which boasts a Singles title at the J2 Prato in Italy and Doubles title in both Nonthaburi (Thailand) and Milan (Italy).

Schoolkate has been at home in Perth since his Round of 16 exit from Wimbledon working with the National Academy team at the State Tennis Centre aiming to further strengthen his game and competiveness on the world junior stage.

Charged for his debut at the US Open, Schoolkate says he’s ready to hit the hard courts at Flushing Meadows and soak up the atmosphere that comes with a Grand Slam tournament.

“Hopefully I can build on the results I had at Wimbledon and perform at my best in my last Junior Grand Slam,” Schoolkate said.

National Academy Head Coach Mr Andrew Roberts says that Schoolkate has demonstrated quality tennis attributes throughout his developmental years at the Academy and that watching him grow as a person and player has been incredibly rewarding.

“It’s been great to see Tristan enjoy success in his first full-time year on the tour since completing his Year 12 studies in 2018,”

“His hard work and commitment has seen impressive ranking and tournament results in 2019, most recently demonstrated in his performance at Junior Wimbledon where he defeated the 7th seed on his way to reaching the round of 16,”

“The Junior Grand Slams offer valuable experiences for juniors as they make their transition through the professional ranks,”

“We wish Tristan all the best during the US Open,” Roberts said.

Minister for Sport and Recreation Mick Murray wished Tristan all the very best on his upcoming US Open Juniors debut and acknowledged his performance and achievements over recent months.

“I congratulate Tristan for this achievement, following on from his recent singles and doubles titles at international competitions in Italy, as well as his recent round of 16 performance at the Wimbledon Junior Championships,”

“Tristan’s success and burgeoning career on the international circuit is a real endorsement of the quality of junior and grassroots tennis in Western Australia, and of Tristan’s commitment to his sport. The State is right behind Tristan for his US Open Juniors debut and we look forward to hearing much more about this young man as his career progresses,” Minister Murray said.

Schoolkate will join a strong WA contingent of players competing at the US Open, including Astra Sharma who earnt direct entry into the Main Draw, and Maddison Inglis and Matt Ebden who will be battling it out in the qualifying rounds for a place in the Main Draw.