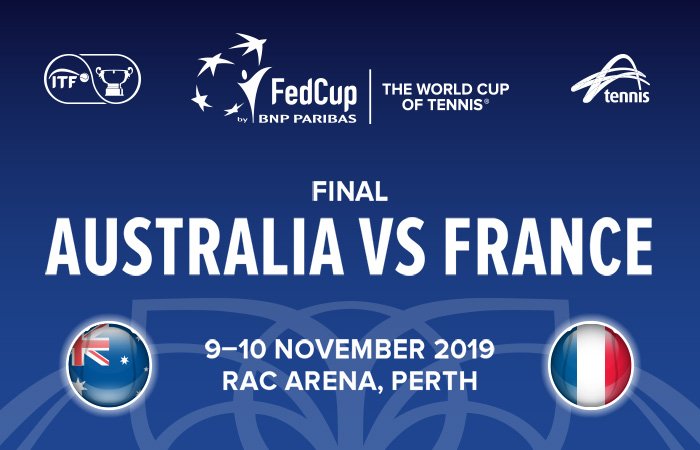 Tickets to the historic 2019 Fed Cup by BNP Paribas Final between Australia and France in Perth on 9-10 November 2019 are on sale today, with a ‘family friendly’ pricing policy to give as many kids as possibly the chance to experience world-class tennis.

Up to four kids (14-and-under) will be admitted free-of-charge with a paying adult.

“We are so excited to be playing the Fed Cup final here in Perth,” Australian Fed Cup captain Alicia Molik said.

“The support of a passionate home crowd is so important to the team and I’m delighted we are giving kids and families the opportunity to come and see our incredible team in action. We want to have a packed Arena for the Fed Cup Final, filled with Aussie fans and families showing their support and cheering us on.

“There are also not many nations who can boast a Fed Cup team starring two Grand Slam champions in Ash Barty and Sam Stosur.

“The Fed Cup is one of the biggest women’s sporting events in the world, where the world’s best female athletes compete for their countries.

“Our team has worked so hard and the road to the Final has taken us two years. We haven’t won a Fed Cup since 1974 and I know we are going to grab this opportunity with both hands and give it our all to make Australia proud.”

Two-day ticket packages are on sale now via Ticketek at www.ticketek.com.au/fedcup.

The Fed Cup by BNP Paribas Final between Australia and France is supported by the WA State Government through Tourism WA.

Fed Cup by BNP Paribas is the World Cup of Tennis. It is the largest annual international team competition in women’s sport, with 108 nations entered in 2019. The competition was founded in 1963 and was originally known as the Federation Cup. The name was changed to Fed Cup in 1974.