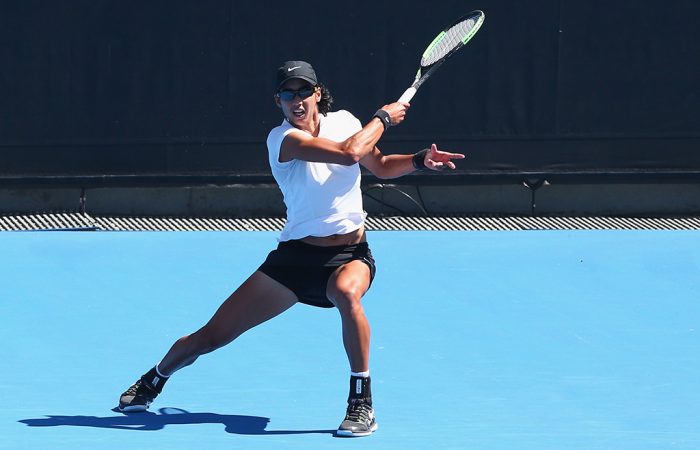 WA’s Astra Sharma has aced her way to an all-time rankings high of number 100 in the world following the most recent WTA rankings update. Now one of only five Australian women currently ranked in the top 100, Sharma joins the likes of Ash Barty (No.9), Ajla Tomljanovic (No.39), Daria Gavrilova (No.58) and Sam Stosur (No.77).

Sharma’s incredible rankings rise since committing full time to the circuit in June 2018, proves the true potential of the powerhouse hitter who brings a lethal kick serve and topspin forehand to her game.

Sharma’s most recent success is noted by a career first WTA final at the Claro Open Colsanitas in Bogota, Columbia.

The Australian Open Mixed Doubles Grand Slam Finalist and Australian Open Women’s Singles qualifier and second round competitor, continued her impressive start to 2019, winning both the Singles and Doubles titles in Mexico, ahead of qualifying for Charleston in the US.

Boasting a remarkable catalogue of success since committing to the circuit full, Sharma made eight ITF finals series appearances from 14 tournaments in 2018.

On Australian soil, Sharma gained momentum from a win in Cairns, a Semi Finals appearance in Canberra, and run to the Quarter Finals in both Bendigo and Toowoomba.

International success continued with Sharma winning both the Gatineau (Canada) and Baton Rouge (United States) titles, finishing runner up in Orlando (United States) in addition to a Quarter Finals appearance in Winnipeg (Canada).

Sharma, who was born in Singapore and moved to Perth with her family, was a Tennis West National Academy athlete before being scouted to Vanderbilt University in Nashville, Tennessee.

“Astra’s achievements at Bogota will qualify her for a main draw entry to the French Open,”

“It’s incredibly exciting and rewarding for Astra who works incredibly hard at her craft,”

“Depending on what happens over the next month or so, there’s a chance we will see Astra with main draw entries in to both Wimbledon and the US Open,”

“It’s definitely not out of her reach. Her outstanding work ethic and deeply ingrained competitive spirit make her the ultimate competitor,” Tsoubanos said.

Remarkable tennis player aside, both Tsoubanos and Vanderbilt University, Head Tennis Coach Geoff MacDonald note that Sharma is nothing short of a standout individual whose poise makes her such a likeable athlete.

“During her tournaments, my phone fills with message of admiration and support. Everyone is just so excited to watch her succeed and rise,”

“The fact that she always carries herself with such grace is her most endearing trait and hands down the reason she’s attracted so many loyal followers,”

“There’s no denying that Astra is an extraordinary tennis player. That aside though, she’s an even finer human being,” MacDonald said.

State Academy Coach Len Cannell shares similar sentiments of the young Sharma who, as a junior, progressed through the ranks of the Tennis West National Academy program.
Cannell states that Sharma continues to be a positive role model for the younger female players coming through the Academy.

“Astra has set the bar exceptional high for the girls coming through the Academy. Most of her fitness records still stand, but it’s more than just that,”

“She’s an exceptional athlete who is driven, respectful and above all appreciative. It’s her performance both on and off the court that we encourage all of our girls to aspire to,” Cannell said.

Sharma was a Tennis West Academy athlete before accepting a scholarship to Vanderbilt University in 2013.