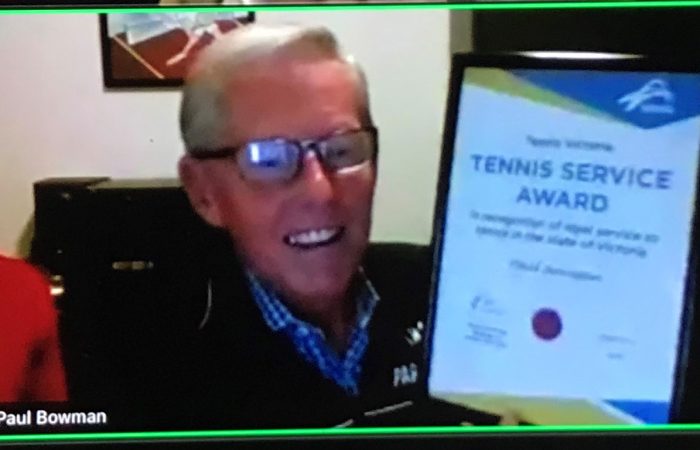 After rescheduling and re-planning multiple times, Paul Bowman from Glen Waverley Tennis Club finally received his much-deserved Tennis Service Award on Sunday evening. The presentation took place on a Zoom call and Paul’s wife was on hand to pass on the award while his achievements were acknowledged.

It had been a top-secret mission to get the award to his house without Paul catching on! Paul was surprised and chuffed with his award and the mission was deemed a success!

Paul’s dedication to Glen Waverley Tennis Club and his role as president goes above and beyond anyone’s expectations. Vice President Deirdre Evans described his recognition as ‘no one more worthy’.

Active on court himself, he’s driven the expansion of Glen Waverley TC teams playing in Open, Veteran and Junior Competitions.

Paul is described as organised with an attention to detail, generous, welcoming and a leader of the club that makes Glen Waverley a club of choice in the area. Congratulations Paul – Tennis Victoria thanks you for your contribution to tennis!

Find out more about Tennis Victoria’s Recognition Program and officially thank a volunteer from your club here.