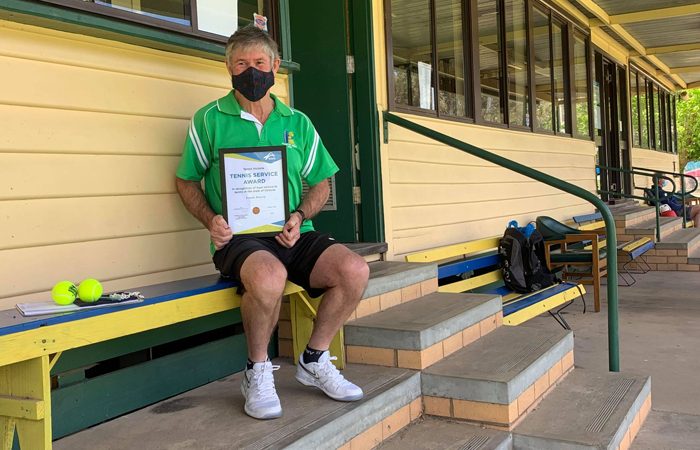 Frank Harris, Wangaratta Lawn Tennis Club, was recognised for his contribution to tennis in Victoria with a Tennis Service Award over the weekend.

After joining the Wangaratta Lawn Tennis Club as a member in the mid 1980’s, he was appointed to the club committee in 1988 where he remains a current member.

As a Life Member of the club, Frank continues to be a major contributor as he has done for nearly 40 years.

His reliability, good nature and willingness to help makes him a magnificent club asset. The time he devotes and skills he brings have played an instrumental part in the club’s continued improvement and sustainability.

Frank is always extremely well prepared and utilises his strong IT skills and intellect to develop and improve software used for competitions, upgrade and maintain the club website and was a key contributor to assisting the club successfully implement the Book A Court system and lighting control.

Frank has also represented the club in competitions over the past 30 years, and sees him a well-respected figure both on and off the court.

Congratulations Frank and thank you for your contribution to Tennis in Victoria.