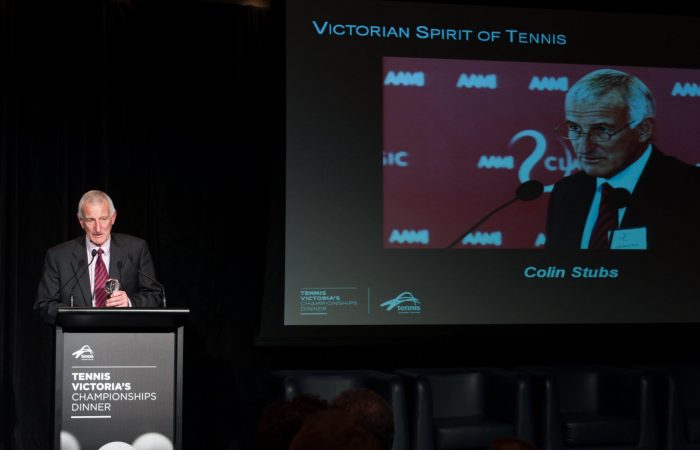 The Victorian Tennis Community is mourning the death of Colin Stubs, a former Victorian Spirit of Tennis Award winner in 2012/13 and Australian Open Tournament Director, Stubs had a huge role in transitioning the Australian Open from Kooyong to Melbourne Park.

The tennis community is mourning the death of Colin Stubs, a former long-time Australian Open tournament director who played a key role in steering the event from the grass courts at Kooyong to the new cushioned hard courts at Melbourne Park in 1988.

‘Stubsy’, as he was fondly known inside the tennis family, was a class act on and off the court. Born on February 27, 1941, he competed against the greats of Australian tennis and ventured onto the international circuit throughout the 1960s when there was little financial remuneration for aspiring players.

Stubs’ tennis career started at 16 with a win in the Victorian schoolboys’ under-19 championship. While finishing a four-year degree in pharmacy, Stubs reached the second round of the 1961 Australian championships.

He first travelled overseas by ship to compete on the international circuit and won a tournament in Cannes, which helped Colin and a mate buy an old VW to get about Europe.

From player to promoter

He retired from the tour soon after to be a pharmacist and in 1975 was invited to work as a consultant for Tennis Australia by the new president and good friend, Wayne Reid.

Stubs was both Australian Open tournament director and pharmacist for many years, “talking to international tennis players on the phone and dispensing headache pills” to the public.

Remembers one player from those days, “you’d go to the pharmacy to find the entry cut off for the lead in tournaments at Stubsy’s Wheeler’s Hill pharmacy.”

Stubs sold his pharmacy in 1978 and expanded his sports marketing and management enterprise, cementing his role with the Australian Open.

With the players questioning the timing of the Australian championships in December and January, and increasingly reluctant to make the long trip Down Under, the event was at a crossroads.

Stubs was a key player in the reborn Australian Open. He was there for the leanest times of the AO when, in 1982, none of the top 10 men’s players entered the tournament, yet in his last year as Tournament Director in 1994, world No.1’s Pete Sampras and Steffi Graf won the championships.

Recalls Paul McNamee in his autobiography Game Changer: My Tennis Life, who took over as AO tournament director in 1995, Stubsy’s advice to him at the time was: “Watch out, there’s always something unexpected that happens.”

“Colin was terrific,” said Woodbridge.  “I was 16 and Colin looked after me for a few years and got my first sponsorship deals. He was aware of how everything operated and gave us opportunities to compete against higher ranked professionals. He really developed that era of Australian tennis. He was multi-faceted and played a major role in the evolution of the AO at a crucial time.”

Stubs launched the (formerly named) Kooyong Invitational in 1988 in partnership with the Kooyong Lawn Tennis Club, the same year the Australian Open moved to its permanent home at the new state-of-the-art $94m complex at Flinders Park, renamed Melbourne Park in 1996.

He continued to run the eight-man exhibition at Kooyong until 2014, and always attracted a strong field, such was his standing with the players. Stubs prioritised relationships with the players and took pride in entertaining them and showing them around Melbourne.

Close friend and former Australian Davis Cup captain John Fitzgerald said Stubsy was integral to the players. “What he says he will do, he does. If Colin gave you his word, it was his bond. He always advised me, and he was a great friend. He was much loved by the players.”

Most importantly, he was a husband to Sue, and father to Tom, Georgia, David and Richard, who sadly passed away in 2019. He also remained fit and vibrant throughout his life, working as a gardener in his beloved Sherbrooke Forest in Melbourne’s Dandenong Ranges into his ‘80s.

“We have lost a great pioneer of tennis,” said Tennis Australia CEO and AO Tournament Director Craig Tiley. “He put players first and gained their trust. He was an astute and widely respected tennis businessman who invested everything in showcasing the sport and staging tennis events of the highest order.

“He was an excellent player and very much his own man.”

Colin Stubs passed away on 13 July with pancreatic cancer, aged 81.