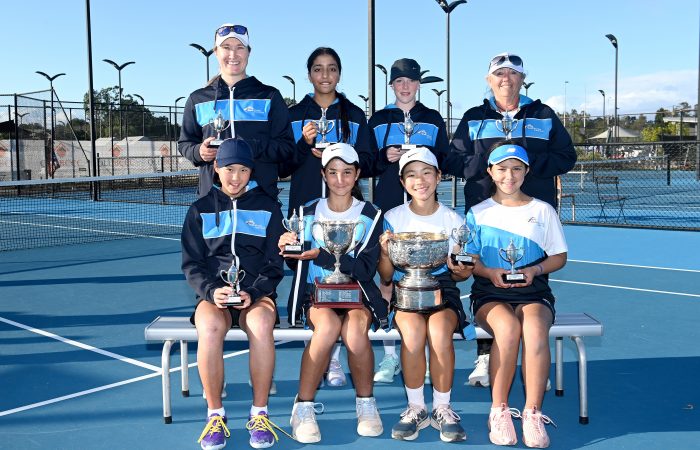 On Thursday June 23rd, 12 junior athletes rose early to make their way to Melbourne Airport. Taking off before the sun had risen, the members of the Victorian 11/u and 13/u teams were on their way to the Gold Coast to compete in the Australian Teams Championships.

With the chance to compete last year taken away at the last minute due to snap lockdowns, the players were raring to go, as many had been selected to represent the state in 2021.

The tournament is a great opportunity for junior athletes to compete in a team and play against the best players from each state and territory around Australia and a team from New Zealand.

“The opportunities that the kids get offered here with Tennis Australia and Tennis Victoria – they’re very fortunate. Ava’s been in the environment since she was nine, so she’s grown up with the girls and formed some beautiful friendships, and great relationships with the coaches this year.”

Victoria swept the girls’ events, with both the 11/u and 13/u teams finishing top of their section and going on to lift the Margaret Court Cup and Mary Hawton Trophy respectively.

13 year-olds Ava Beck and Koharu Nishikawa had previously combined to win the girls doubles at the National Claycourt Championships in 2021.

The 15/u teams swiftly followed, with their matches being played over the first weekend in July. The boys missed out on third place, going down 2-1 to New Zealand, and while the girls were narrowly pipped by New South Wales in the grand final, their incredible efforts resulted in one of Victoria’s best-ever performances at the championships!

Congratulations to all our junior athletes – Victoria is so proud of all you’ve achieved.

Full draws and results can be found here.