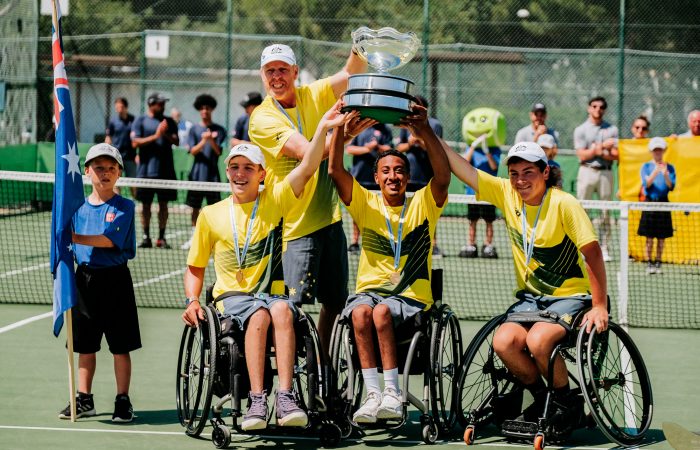 Sixteen-year-old Dumsday said the result hadn’t quite sunk in after the match.

“It’s an amazing achievement and it still hasn’t properly sunk in yet,” said Dumsday, who was also a member of the title-winning Australian team in Israel in 2019.

“The week’s been a great week of tennis for all of us, on and off the court. We’ve all developed so much, which you would be able to tell in a week. Obviously the highlight was definitely today, winning (the final), which was amazing.

“Tennis is a very individual sport and with the World Team Cup it brings a whole team together and you can all work together, there is teamwork on and off the court, which is really good.”

Eighteen-year-old Naser added, “We put so much work in leading into the tournament.

“We had a good two weeks before the tournament, training every day. It was very tough, and it showed that we put the work in.”

Tennis Australia National Wheelchair Development Squad Coach Greg Crump was thrilled with the way the team carried themselves during the tournament.

“I’ve worked with the team for the last eight years or so – Saalim and Riley, they’re both in Melbourne. It was great to have a new guy, Ben Wenzel, from Cairns come out and make his debut. That was fantastic,” Crump said.

“But also, the way they conducted themselves off the court, I was equally proud as a coach.

“Over the last two years, where we haven’t been able to travel has been challenging.

“To get everyone up and about to compete with a lot of Europeans that have pretty much been competing the last couple of years has been a fantastic effort by all.

“To have a rookie player, Ben Wenzel, has been a standout moment. There were three players bidding for that position. Over the last six months he stood out the most. He worked hard on his game. He played two matches this week and won both matches.”

The finals of the World Junior Tennis competition will be held from 1-6 August in Prostejov, Czech Republic before the Junior Billie Jean King Cup and Junior Davis Cup take place from 1-6 November in Antalya, Turkey. Sixteen nations will compete in each competition as they vie for the top honours in junior team tennis.