Bendigo and Traralgon kick off the Summer of Tennis in style! 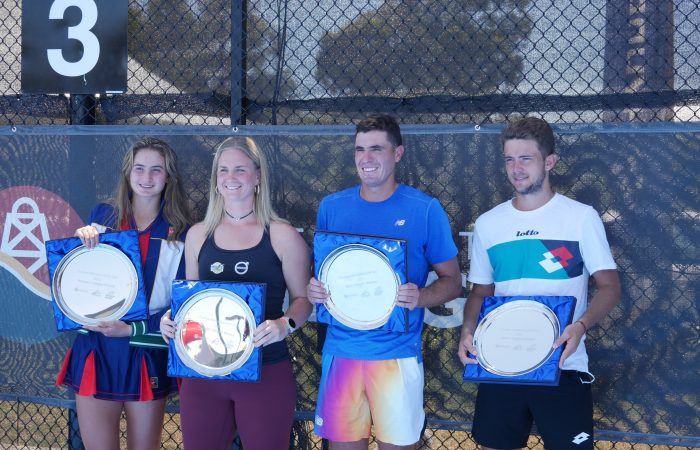 Two Victorian towns had the honour of launching the 2022 Summer of tennis at the Bendigo and Traralgon Internationals.

The ATP Challenger tour at the ITF Women’s tour descended on regional Victoria for week of world-class tennis in the lead up to the Australian Open.

Hailing from all over the world, players arrived at Bendigo Regional Tennis Centre and Traralgon Tennis Association for seven days of intense competition.

All eyes were on former world number nine Coco Vandeweghe, whose adoring fans eagerly awaited the order of play and quickly filled up the seats surrounding court four each day.

Vandeweghe didn’t go unchallenged in her bid to reach the semi-finals, as she was taken to three sets by two of her three opponents. But her bid for the championship came undone at the hands of sixteen-year-old Andorran Victoria Jimenez Kasintseva, who defeated Vandeweghe 7-5, 4-6, 6-3 to advance to the final.

But it was Belgian Ysaline Bonaventure who was crowned champion, defeating the young Jimenez Katsintseva 6-3, 6-1 in the final women’s clash.

In the men’s competition it was the Frenchmen who dominated the first rounds, with Enzo Couacaud flying the flag for his country in the Men’s Singles final against American Ernesto Escobedo.

It was a tough battle under the Bendigo sun as an enraptured crowd sat stunned by the impressive standard of play. The cheers erupted as Escobedo hit the winning stroke to claim his 5-7, 6-3, 7-5 victory.

Over in Victoria’s East, a similar narrative was written as top seed in the Women’s Singles Xiyu Wang from China fell early, paving the way for fellow countrywoman and 198 ranked, Yue Yuan to put her stamp on the competition.

Yuan won all her matches in straight sets, as she did the final, defeating Argentina’s Paula Ormaechea on Court 9 in front of the Traralgon crowd 6-3, 6-2.

On the men’s side, high profiled French player Gilles Simon was beaten early in the tournament. The French native, who has competed in the last 18 Australian Open events at Melbourne Park, fell in the quarter finals to Jesper De Jong from the Netherlands, 6-4, 6-2.

After a tough match, De Jong then fell in the semi-final to the Czech Republic’s Tomas Machac.

In the bottom half of the draw, Bjorn Fratangelo made the final after a tough three set semi final win over fellow American Mitchell Krueger.

The pair played the match of the tournament, going nearly three hours with three tiebreaks involved. Fratangelo eventually winning 7-6, 6-7, 7-6 to face Machac in the final.

Machac, who had far less time on court than his opponent accounted for Fratangelo in the final, eventually winning in straight sets 7-6, 6-3.