Over the past five years ANZ and Tennis Australia have delivered 200,000 racquets into the hands of first-year primary school children, with 30,000 children from more than 700 schools receiving their first racquet in 2021.

At Syndal South Primary school today, Woodbridge presented racquets to 40 prep students who then hit the courts for a once-in-a-lifetime opportunity for a training session with the tennis legend.

The magnificent Australian Open trophies – the Norman Brookes Challenge Cup and the Daphne Akhurst Memorial Cup, also known as Norm and Daphne, joined the celebrations, along with a giant golden tennis racquet. 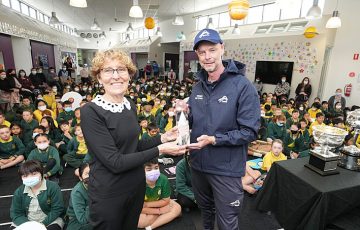 Syndal South also had the honour of being named Tennis Victoria’s Most Outstanding School in this year’s Victorian Tennis Awards. While the winners were announced in a virtual ceremony in October, Tennis Victoria Coaching Leader Jon Watson was excited to present Principal Helen Freeman with the trophy in person.

As well as putting 200,000 racquets in the hands of kids over the past five years, some of Australia’s most loved tennis names, including Woodbridge, John Fitzgerald, and Casey Dellacqua have visited schools across the country – both in person, and over the past 18 months, virtually, to inspire and encourage the kids to pick up their new racquets and swing into action.

“The ANZ Tennis Hot Shots Racquet Roadshow has been an outstanding success and is a credit to all our team involved in the Tennis in Schools’ program and our longstanding partnership with ANZ,” Tennis Australia CEO Craig Tiley said.

“We hope that by supporting grassroots programs like the ANZ Tennis Hot Shots Racquet Roadshow we can help inspire the next generation grow a lifelong love of tennis,” ANZ Managing Director of Retail Banking, Katherine Bray said.

Twenty-two-time Grand Slam champion, Todd Woodbridge, has handed out thousands of racquets to school kids across the country over the past five years, and has continued his classroom visits virtually over the past year.