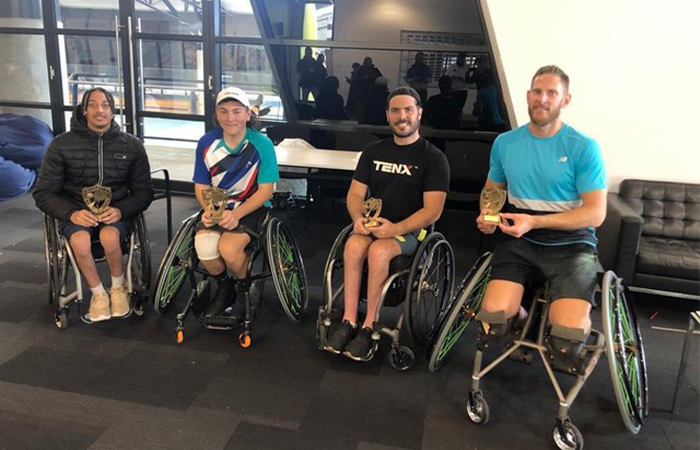 Riley Dumsday and Saalim Naser have taken top honours in men’s doubles, while Sally Schwartz proved the best of the women at last weekend’s Melbourne Wheelchair Classic, held at the National Tennis Centre.

Weekes’ experience was on show as he was virtually untroubled heading into the grand final, having lost only two games in both his previous matches. He proved too good for Dunn on this occasion, coming away with a straight sets victory to claim the silverware.

Despite being eliminated in the Men’s Singles semi-finals, Riley Dumsday and Saalim Naser went into the Men’s Doubles tournament determined to make an impact. The pair claimed a straight sets victory over second seeds Finn Broadbent and Matthew Leggett, while Weekes and Dunn clashed against Olympic silver medalists Dylan Alcott and Heath Davidson.

After losing the first set six games to none, Weeks and Dunn staged an almighty comeback, eventually winning 0-6, 6-4, 10-7 to set up a grand final match against the Victorian youngsters.

Dumsday, who is a 2021 Victorian Tennis Award winner, also faced off against Naser in the grand final of the Juniors competition, with Naser emerging victorious in that encounter.

In the Women’s competition, Tennis Victoria Most Outstanding Athlete with a Disability nominee Sally Schwartz distinguished herself as the best player on the day, winning both her matches in the round robin competition to see her finish safely on top of the ladder ahead of Hayley Slocombe and Megan Beatty.

To find out more or to get involved in Wheelchair Tennis in Victoria, please click here.

Grand Final results can be found below, for the full draws and results please click here.