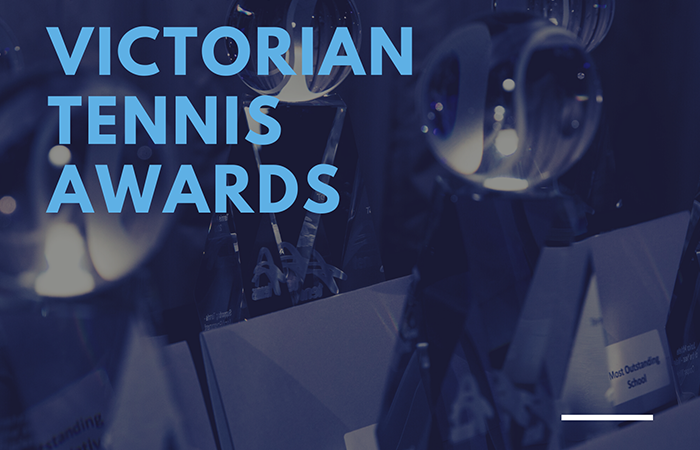 The 2021 Victorian Tennis Awards winners were announced on Tuesday Night with 15 award recipients and fellow finalists recognised in front of the Victorian tennis community.

Tennis Victoria Acting CEO Adam Crameri was thrilled with recognising the award winners and finalists in front of the Victorian tennis community.

“Congratulations to all finalists and to the winners of the 2021 Victorian Tennis Awards. We had incredible nominations put forth by the Victorian tennis community and being able to recognise the finalists and winners tonight was a privilege.”

“A special congratulations to the Victorian Spirit of Tennis Winner Maurice Gleeson OAM for your drive to increase the profile of Blind Tennis across Victoria, Australia and Internationally, and for what you do for tennis in Victoria.”

In the athlete categories, the Junior Athlete of the Year Awards were won by Roisin Gilheany and Cooper White with Glenn Busby winning the 30+ Tennis Senior Award.

The Most Outstanding Athlete with a Disability award welcomed joint winners this year with Olivia Sayers and Riley Dumsday winning the trophies.

The volunteer achievement award was won by Liz Tektonopoulos and Excellence in Officiating award went to Eva Bettiol.

In the schools category, Syndal South Primary School won the Most Outstanding School award and winning the Supporting Tennis – Local Government Award was both the Yarriambiack Shire Council in Victoria’s North West and Brimbank City Council in Melbourne’s West.