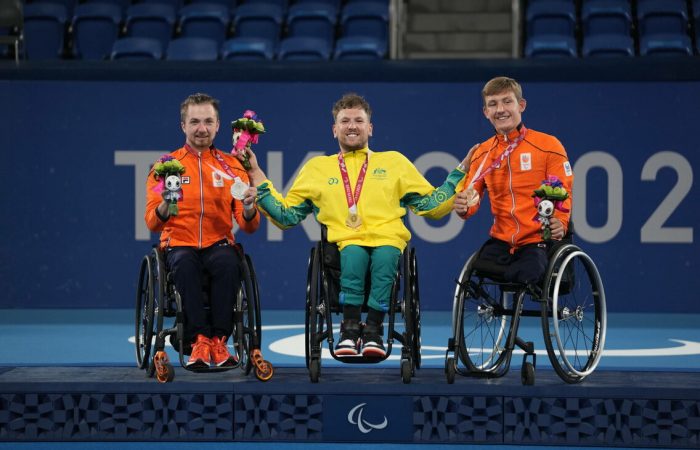 The Australians has a remarkable run, culminating in a silver medal in the Quad Doubles, and back-to-back gold medals for Alcott in the Quad Singles competition.

With three out of the four wheelchair tennis players hailing from Victoria, the state was very well represented.

A lengthy weather delay on day one made for a shaky start for Victorian debutant Martyn Dunn, who began play on court a full six hours after his match was originally scheduled.

Dunn was unfortunately eliminated in the first round of competition in both singles and doubles, having teamed up with Paralympic legend Ben Weekes, who was competing in his fifth Paralympic games.

Despite the results, the ever-positive Dunn was thankful for the experience and declared his intention to return to Paralympic competition in Paris in 2024. 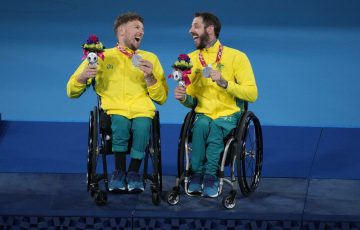 The Aussies had won gold in Rio 2016, and Alcott was also chasing his own slice of history as he looked to complete the elusive Golden Slam.

After a bye in the quarterfinals, the pair cruised through their semifinal match, defeating Japan’s Moroishi and Sugeno 6-2, 6-4.

The boys fought valiantly in the weather-affected gold medal match, but were eventually bested by 21 year-old Sam Schroder and his teenage partner Niels Vink from the Netherlands. The final score was 6-4, 6-3.

Alcott and Schroder then clashed again in the Quad Singles Gold Medal match, but the Aussie wasn’t going to be denied a gold medal a second time.

After a grueling first set that lasted a full 53 minutes, Alcott emerged victorious in the tie-break. He then began the second set filled with a new confidence, and his experience and skill was truly extraordinary as he took command of the second set, cruising to a 7-6(2), 6-1 victory!

Having successfully defended his Paralympic title, he can now add this gold medal to an already impressive haul of titles he’s won this year. Now all that stands between Dylan and the elusive golden slam is the US Open.