Brilliant Bronze for Barty and Peers! 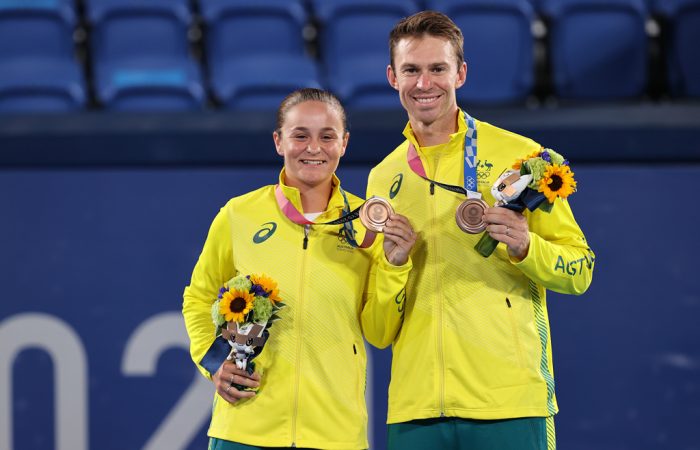 History was made at Ariake Tennis Park in Tokyo last Saturday, as Victorian John Peers and Wimbledon champion Ash Barty became the first Australians to medal in the Mixed Doubles!

Peers and Barty had an incredible Olympic run, first defeating Argentinian pair Horacio Zeballos and Nadia Podoroska 6-1, 7-6(3) in the first round.

They followed that with an impressive win over Stefanos Tsitsipas and Maria Sakkari, edging out the Greek pair in the tiebreak to win 6-4, 4-6, 10-6.

The Aussies narrowly missed out on a chance to play for gold, putting up a truly courageous effort against Andrey Rublev and Anastasia Pavlyuchenkova but eventually going down 7-5, 4-6, 11-13.

Novak Djokovic made the decision to pull out of the bronze medal match due to a shoulder injury, meaning that John and Ash would be guaranteed a spot on the podium!

Their bronze is just the sixth Australian Olympic tennis medal, and the enormity of this Olympic games and achievements of the Australian team isn’t lost on the Victorian Olympian.

“There was so much uncertainty leading into the Games and to be able to see the way the Australian team’s come together and sort of really bonded has really shown the Australian spirit, the way that all the athletes get behind each other,” Peers commented.

A huge congratulations to John and Ash for their brilliant bronze! The pair now begin preparations for the summer hard-court season in America, with the US Open in their sights.