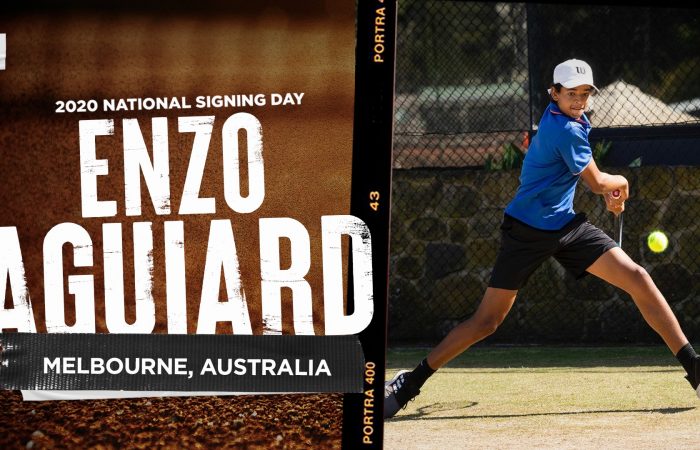 18-year-old Victorian, Enzo Aguiard is ready to play at the University of Alabama.

After verbally committing to the Crimson Tide and signing in November 2020, Aguiard will make the 15,288 km journey to the United States in June to join his new teammates in Tuscaloosa.

Aguiard has had a long affiliation with Tennis in Victoria, dating back to when he was four years old.

“My Dad got me into Tennis when I was four years old, he brought me to the local park and there was a wall – I used to hit on the wall before I joined Royal Park Tennis Club, which was a five minute bike ride from my house.”

Following a great junior career and recently playing Tennis Victoria Pennant at Royal South Yarra Tennis Club, like many Victorians, Aguiard made the decision to take the College pathway to further develop his career on and off the court.

That’s when the University of Alabama reached out.

“They messaged me one morning on Instagram but after that we got in touch. I sent them film of my matches before COVID started and then they assessed me on that.”

“I was having really good conversations with the coaches before signing, Alabama (Men’s Tennis Coaches) and my coach (Michael Logarzo) were on the same page in terms of what my improvements needed to be and combining this with being in the SEC (South Eastern Conference) which is really strong and known to be good for most sports, Alabama was the best option for me.”

Aguiard also found it helpful when making his decision to reach out to fellow Victorians who have already taken the College Tennis route, including Jeremy Taylor (University of Memphis) and Campbell Salmon (Rice University). Having an interest in many sports, Aguiard is excited to be a student-athlete amongst other successful university teams playing in the SEC from the Alabama Crimson Tide.

The university featured on a national scale in the United States across the last 12 months, with the basketball team qualifying for the NCAA (National Collegiate Athletic Association) March Madness Tournament and the successful and highly-profiled football team won the National Championship last January.

“It’s going to be a great challenge. There’s going to be a bit more pressure with all the other sports that are used to performing well and I’ll try and bring that same energy and have a successful tennis team like the basketball and football programs.”

“I’ve watched a few of their (Men’s Tennis Team) matches live, they had some good wins against Ole Miss (University) and Mississippi State (University). All the teams want to win and get as high as they can in the rankings and I’m looking forward to that.”

As part of being a student-athlete, Aguiard will also take classes amongst his training workload with the goal of earning a qualification at the end of his College experience.

“I’ve chosen to study Management Information Systems but the school has said the first two years are general classes, so if I’m leaning towards a different major I can change, or keep the one I’ve chosen.”

Like throughout the recruitment phase, the University of Alabama has been checking in on Aguiard and his teammates and bringing the Men’s Tennis team together despite being on opposite sides of the globe.

“We had a few zoom calls with all the other freshman which has been great to get to know the other players that are going to be with me for the next four or so years.”

“We often message as well, about how tournaments are going, we try and keep contact every week to see how they’re going and how I’m going.”

Aguiard and his teammates will have another challenge ahead – the current pandemic and how the University of Alabama transitions their international players into Tuscaloosa.

“The coaches have said it’s (the pandemic) still quite bad over in the States, but Tuscaloosa is a small country town with mostly students, we still have to do weekly swab testing and do a week’s quarantine when we get there.”

It’ll be the first time that Aguiard has been to America and is ready to make the journey across the Pacific Ocean.

“I’m pretty excited to get over there to see the cultural differences between Australia and America. I’ve heard the population is about 100,000 people so it’s similar to Bendigo.”

“And I’ve heard the people are nice too!”