Tennis Victoria have agreed on a playing surface for next Summer’s Doubles Championship, and it’s not where you’d expect.

The championship will be played on one of the most iconic and popular parts of Melbourne, on the tramlines running down Bourke street. 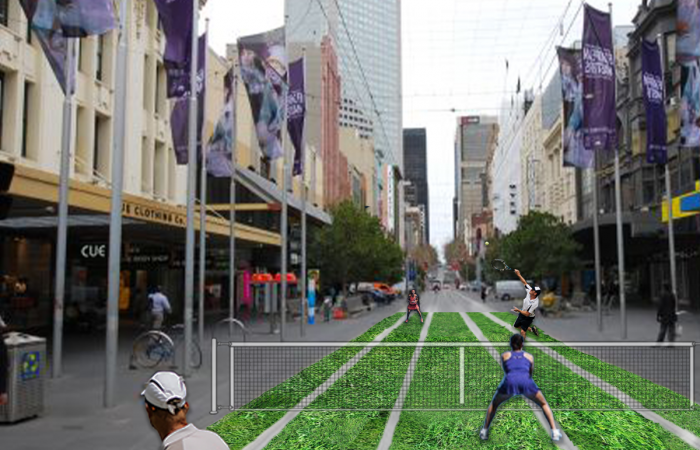 Being the external court lines that run parallel to the singles lines, Tramlines have historically been a large part of the Doubles game in Tennis, and in a major milestone for Tennis in Victoria, playing on tramlines will bring an increased reality to next year’s Championships.

“We’re already feeling the ease of playing the backhand down the line, and we haven’t even started our first match.” said a future competitor.

In a brand-new doubles format in 2022, matches will be capped at 2 hours to allow the Route 96 Tram to pass through, and the ease of being in Bourke Street Mall means that competition organisers only need to walk just 50 meters to get new Tennis Balls from the sports store.

“It just made complete sense to host it here. All of the facilities are already in place at Bourke Street, for instance, our umpires will only need to make their way to the 2nd level of the Bourke Street Mall to officiate the game” said a Tennis Victoria spokesperson.

“We can’t believe we didn’t think of this earlier; the tramlines are the same distance apart and there are seats along the Mall for the players changeover, and of course we have the undercover shade at each Tram Stop in case we face inclement weather” said a spokesperson from Melbourne Trams.

In a coup for Tram commuters and the Tennis Community, the Doubles Championship will be held in the Free Tram Zone, ensuring that tickets to the upcoming championships are free to the public.