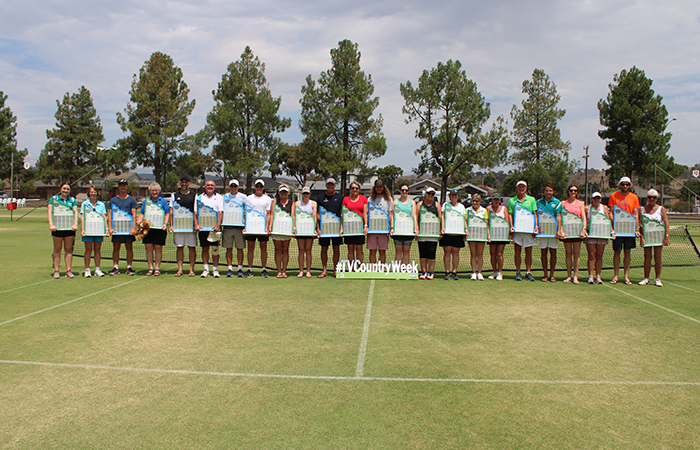 Tennis Victoria Country Week 2020 has come to an end, and what a week it was. Wodonga Tennis Centre and Albury Tennis Association played host to a fantastic week of tennis, fun, friendships and community.

On the final day there could only be 27 winners.

Wodonga local Sandra Allen capped off a wonderful week taking the title with the Wodonga Whiskas in the Special B2 Women’s grade. Named on Monday as a Country Week Legend, Sandra was busy on court playing while also managing the catering in the canteen at the club. Sandra is a true Legend!

The Match Makers again made the trip down from Brisbane for the second time to take the title in the Women’s B1 grade. This was their second win in a row. Complimenting their opponents today, and all week, the Match Makers were adamant they will be back next year and commended all players for the sportsmanship, comradery and sense of community that the Country Week event has.

The full list of Country Week Winners and Runners Up are:

There were 27 grades contested over the week.

Over 3592 eight game sets were played.

44 tennis nets were produced by Henderson’s of Bendigo. The temporary court nets are then available for purchase by participating teams to take home to their clubs.

540 egg and bacon rolls were eaten by weary morning participants.

Over 700 Powerades and 2400 bottles of water kept players hydrated.

There were 4 (much needed) rain delays across the week giving the region some welcome rain relief.

Over 60 hardworking volunteers from the Wodonga Tennis Centre and Albury Tennis Association, working together with Tennis Victoria, contributed to the wonderful event presentation that the club displayed.

Wodonga and Albury teams had the shortest drive to get to Country Week. Others had a bigger trip with players travelling from as far as Brisbane, Merimbula, Launceston, Rockhampton, Port Macquarie and Darwin.

We hosted 3 community support organisations. Thank you to the EJ Whitten Foundation, Beyond Blue and FARA Australia for their support of Country Week.

The greatest community sporting event may have come to an end for another year but it will be back again in 2021 from Sunday 14 to Friday 19 February when it heads to Swan Hill.