Tom Keel and Fiona Walker acknowledged for their contribution to tennis 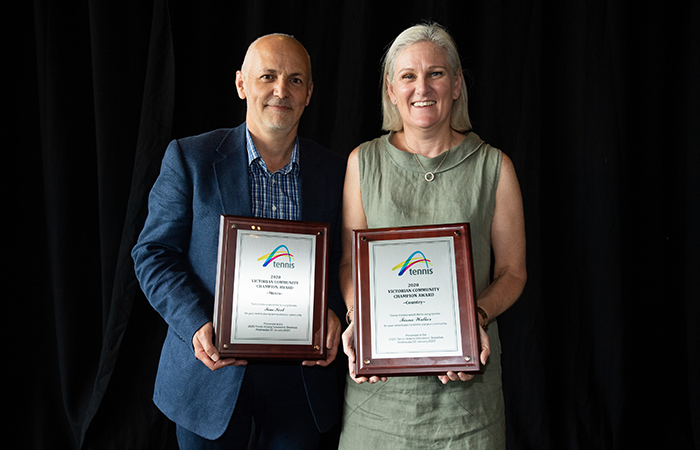 Tom Keel and Fiona Walker have been recognised for their service to tennis by each being presented with a Community Champion Award at the Tennis Victoria Volunteers’ Breakfast during Australian Open 2020.

Hosted by Neroli Meadows, supported by Ian Cover roving in the crowd, almost 300 volunteers gathered in the MCG Members Dining Room for the event. 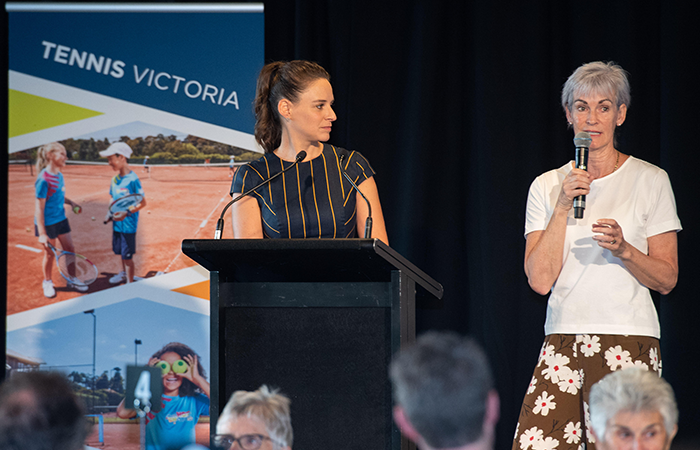 The Tennis Victoria Volunteers’ Breakfast is one of Tennis Victoria’s biggest and most important events. There are thousands of volunteers that contribute so much of their time to the sport and this event, in addition to a number of other initiatives, is an opportunity to say thank you.

Tennis Victoria President, Prof. Emma Sherry, congratulated Tom Keel (Metro) and Fiona Walker (Country) on their awards and wanted to thank them for all the time they give up so others can enjoy the sport.

“The volunteers we have in our sport are incredible individuals and we can’t thank them enough for the countless hours they put in,” Prof. Sherry said.

“Tom and Fiona have been wonderful contributors to the tennis, and culture, of their tennis clubs.

“Whether it’s on weeknights, weekends, early mornings or public holidays, the volunteers are the lifeblood of the sport and we love all the work they do,” she said.

Special guests, former Great Britain Fed Cup Captain, Judy Murray, and 1997 French Open champion, Iva Majoli, were in attendance and entertained the crowd with their experiences in the sport. 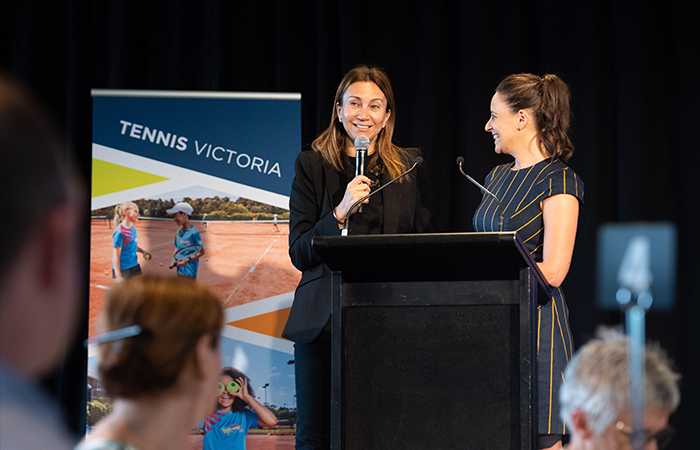 Tom Keel is the president of Carton Gardens Tennis Club. Keel has driven the development of a number of programs and initiatives, including women’s programs, charity fundraisers and social evenings.

He was also instrumental in enabling the club to do their part in combatting sexual violence in the adjacent park by leaving their LED court lights on until curfew. This is in addition to committing to becoming more environmentally friendly by aligning their plans with UNESCO’s Sustainable Development goals.

“It was a nice surprise,” Keel said.

“I think the award came about because we made a conscious effort to really engage with the community.

“It’s a very nice bit of recognition, I take it as our whole committee deserve it because they put in a great effort,” he said.

Fiona Walker is a valuable member of the Riddell’s Creek Tennis Club. Her desire to see junior participation flourish has seen the club invest in the Tennis Victoria Future Leaders program so that they can encourage the next generation to be more involved in the club.

She has a positive and infectious attitude and is always keen to further develop the knowledge base of the coaches and adopt programs to grow participation.

“I was shocked [with the award] because we’re such a small club and you think just some of the bigger clubs are doing great things.

“Here I am working away trying to make a difference and do small changes and spend as much time as I can to promote tennis, and the club, so when you receive something like this that’s why it’s unexpected – I was quite surprised.

“I don’t do it to get anything out of it for me, I just want to help the club and support them,” Walker said.