2019 Victorian Tennis Awards: All the winners 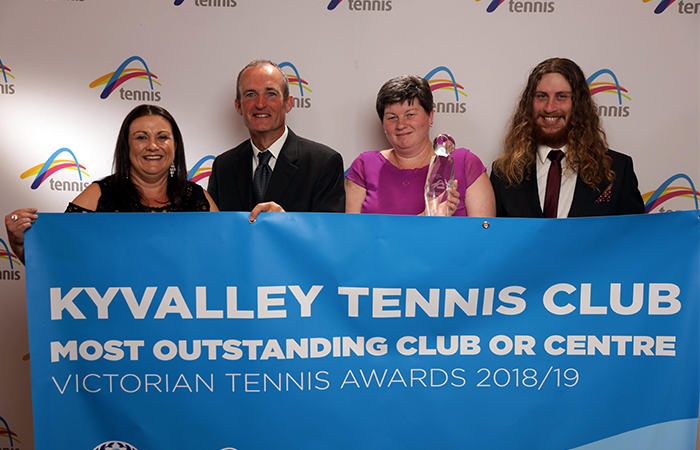 Tennis Victoria recognised on and off court success for the 2018/19 season at The Pullman, Albert Park on Friday night.

Tennis Victoria handed out a record 14 awards during the event, with Kyvalley Tennis Club taking out the hotly contended 2018/19 Club or Centre of the Year award.

The small club, located about two and a half hours from Melbourne, is driven by the community, with the tennis club providing a social outlet for the town of 329 permanent residents who are often affected by drought and economic conditions.

Kyvalley Tennis Club has seen significant growth in many areas over the past year and are an extremely deserving recipient of the award.

“This is a huge acknowledgment for our club. We’re a small country club and after reforming in the last seven years this is great recognition,” Williams said.

“We’re in amongst the cow paddocks and it’s great recognition for the volunteers, players and committee members, we couldn’t be happier.

The most prestigious individual accolade available on the night, the Victorian Spirt of Tennis award, was won by Norman Cahill.

The Spirit of Tennis award recognises a significant and valuable contribution to the advancement or popularity of the sport in any field and Norm’s amazing journey in tennis as both a player and coach has seen him a deserving winner.

As an 88-year-old, Norman is still coaching up to two times per week at Nagambie Primary School and St. Joseph’s Catholic School.

Check out all the winners from the evening below.

Amy Stevens has claimed her first Junior Athlete of the Year – Female title after a standout season.

A strong end to 2018 saw Amy Stevens fly into the new year with a mountain of confidence.

Some notable performances included a singles win at the Ballarat Open Platinum AMT & Gold 18/u in December 2018. She also had a number of impressive doubles finals, most notably at the Victorian Grasscourt Championships in December 2018.

Fresh off his Junior Davis Cup appearance for Australia, Cooper White has claimed back to back Junior Athlete of the Year – Male titles.

Cooper’s progress over a number of years has seen 2018/19 deliver some strong results on court. Titles in Indonesia and New Zealand came off the back of a wonderful win at the 16/u Australian Championships in doubles.

His big highlight came in April 2019 when he was selected to represent Australia at the Junior Davis Cup qualifying tie in Thailand.

Phillip Goodman has claimed the Excellence in Officiating title in the second installment of the award.

Phillip understands the need to bring people along the officiating journey by asking and leading by example.

Phillip is prepared to work in whichever role is required and is often mentoring in other disciplines and traveling interstate.

Most Outstanding Athlete with a Disability – Dylan Alcott

Dylan Alcott has added to his growing list of accolades after being award the Most Outstanding Athlete with a Disability for the fifth time in six years.

Dylan continues to be a positive role model for not only other tennis players and athletes with a disability but the wider community.

Dylan has now competed in and won all four Grand Slams.

The Most Outstanding Competition was awarded to the Central Wimmera Tennis Association implemented ANZ Tennis Hot Shots Match Play after recognising a gap in their junior tennis program.

Since starting the Match Play (Section 5) Orange Ball competition, the numbers have increased from 53 to 72 in just one season.

The competition was able to attract local juniors from different nationalities (such as Indian, Chinese and Taiwanese) who have not been involved in tennis programs in this area before.

Shirley skyrocketed to world No.1 in June this year and has been rewarded as the Most Outstanding 35+ Tennis Senior.

Shirley was also a finalist at the World Individual Championships, losing only one match in the round robin competition.

Although Shirley is a quiet player, her determination and friendliness sees her highly respected amongst her tennis peers.

The 121st Yarrawonga Easter Tournament once again proved a huge success and has been awarded with the Most Outstanding Tournament for 2018/19.

Over 1400 registered players competed in the 101 different events throughout the tournament, which totalled 2006 matches over the course of the four-day event.

Players flocked to Yarrawonga from all over Australia, with some even venturing from overseas to play.

All in all, the tournament aims to be a happy, friendly, welcoming place which is an awesome way to spend Easter with family and friends.

In a major coup for Nagambie Primary School, the school coached by the Victorian Spirit of Tennis award winner, Norm Cahill, has taken out the 2018/19 Most Outstanding School.

Tennis is a core part of Nagambie Primary School’s physical education program amongst all year levels.

The assistance of the Sporting Schools Program has allowed the school to use the racquets, nets and balls provided during the PE sessions.

A strong relationship with the Nagambie Tennis Club allows for the senior students to use the courts – free of charge – during their lessons.  The club also hosts a one hour Sporting Schools ANZ Tennis Hot Shots program which is run every Monday during the entire school year for students in Grade 3-6.

The students and the school have an avid interest in tennis, with some even taking up competitive tennis on the weekends.

The Mornington Peninsula Shire has benefited from a strong relationship with Tennis Victoria over the past year and have been recognised with the Supporting Tennis – Local Government Award.

The Shire was able to complete a detailed tennis facility audit and prioritisation project, gaining a sound understanding of the current condition of existing facilities and current state of play for tennis within the Shire.

The collaboration between Tennis Victoria and the Shire allows for the sport of tennis and associated clubs to thrive in the area year in year out.

Additionally, the Shire provides sponsorship and promotion of the Mornington Peninsula Tennis International, held within the region each year, as part of the Australian Pro Tour.

The program offers people of all ages who are blind or vision impaired safe and inclusive opportunities to participate in tennis.

With active support from VicHealth, the program has been running since 2010, aiming to increase participation levels amongst those with vision impairments.

Audible, colour-contrasting balls containing bells are used to ensure participants are able to locate them on court.

The program has improved the health and wellbeing of over 200 people living with vision loss. Additionally, the program has helped to change the lives of participants, giving them confidence, a sense of independence and positivity.

A busy and productive year has seen Ray Reymers presented with the Volunteer Achievement award.

President of the Coburg Tennis Club, Ray’s proactive nature, willingness to try new things and overall enthusiasm has seen him significantly contribute to the ongoing success of the club.

During Ray’s time as President, the club has installed LED lights and Book A Court, developed ANZ Tennis Hot Shot courts, undergone refurbishments to the kitchen and introduced online memberships.

This has culminated in substantial income generated for the club which has been reinvested in other areas such as improved heating, painting and refurbishing.

With over 20 years coaching experience, Topseed Tennis’ Yvonne Fantin has taken out the 2018/19 Coaching Excellence – Club or Centre title.

Yvonne delivers a comprehensive, innovative and inclusive coaching program that offers pathways for players from a beginner level all the way to the elite level.

Kyvalley Tennis Club has taken out the 2018/19 Most Outstanding Club or Centre.

Kyvalley is a small club doing big things. The community of 329 permanent residents incorporates a hall, community park / pool, and the tennis club.

Nestled amongst dairy farms about two and a half hours from Melbourne, the club and its facilities are driven by the community.