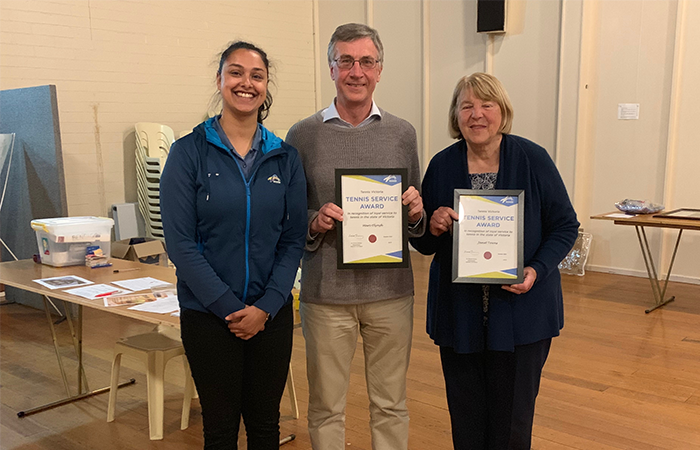 Diamond Creek Tennis Club volunteers, Janet Towns and Marc Olynyk, were recognised for their contribution to tennis in Victoria after receiving a Tennis Service Award over the weekend.

Both Janet and Marc have been involved in the club for many years and are both Life Members.

Janet joined the club committee in 2000 after nearly 30 years of playing and was appointed Treasurer in 2008, in which she continues today.

Janet plays a pivotal role in the day-to-day management of the club finances, something she is extremely committed to.

When not managing the club registrations and memberships, Janet is organising fundraisers, working tirelessly behind the scenes at social functions, attending working bees or simply enjoying time on the court where she continues to play competition with the club after 45 years.

“In my lifetime, (the club) has been very important to me,” Janet said.

“I have played (tennis) nearly every week of my life.

“I have thoroughly enjoyed it.”

With Janet working alongside the “go to” person to get things done, Marc, Diamond Creek Tennis Club is evidently in capable hands.

Marc has been a club member for over 15 years, holding a number of roles including junior coordinator, being on the senior committee, and for almost 10 years was Secretary of the club.

Some of Marc’s key achievements include; coordinating activities at the club, organising financial grants and being a key contributor to several facilities upgrades, ownership and organisation of court maintenance, setting up the club’s webpage and much more.

Marc continues to serve on the committee and help where he can. Like Janet, when he isn’t helping out the club, he enjoys playing tennis on the courts he works to maintain.

“I have enjoyed the work I have been able to do for the club and trying to raise tennis in the community which has been a really great experience.”

Congratulations Janet and Marc and thank you for your contribution to Tennis in Victoria.